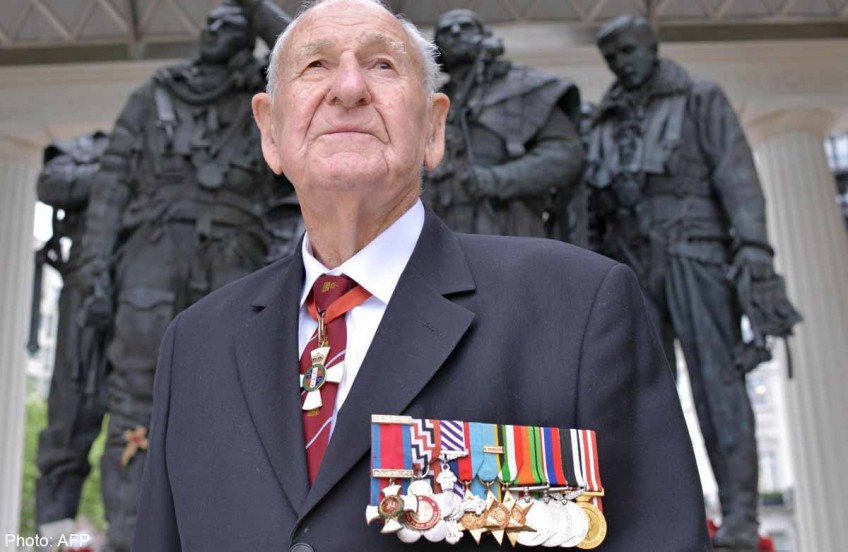 New Zealander Les Munro had planned to sell his medals, logbooks and other memorabilia to raise funds for maintenance of the Bomber Command War Memorial in London, estimated at 50,000 pounds (S$102,000) a year.

But the sale, scheduled for Wednesday, was called off after Lord Michael Ashcroft agreed to donate 75,000 pounds towards the memorial's upkeep, auction house Dix Noonan Webb (DNW) said.

Munro piloted one of the 19 Lancaster bombers that left a British airbase on May 16, 1943, on a top-secret mission over Nazi Germany's industrial heartland in the Ruhr Valley.

They were carrying the revolutionary "bouncing bomb", which skidded along the water's surface once released and was used to attack three dams.

The mission, immortalised in the 1955 film "The Dam Busters" starring Michael Redgrave and Richard Todd, destroyed two of its targets and damaged a third, drowning 1,600 people and forcing the Nazis to divert significant resources to rebuilding.

DNW said 95-year-old Munro had agreed to donate his medals to Auckland's Museum of Transport and Technology, which in turn would donate an additional 10,000 pounds to the memorial's maintenance.

"I am content that I have achieved my goal of doing all I can to ensure that the men of Bomber Command who lost their lives in WWII will be remembered with pride for generations to come," Munro said in a statement.

He said he had been astonished by the response to his plan to sell the medals and was pleased they would be staying in New Zealand.

"There was a delicate balance to be achieved between raising funds for the RAF Benevolent Fund and ensuring that my medals are preserved for future generations of New Zealanders to appreciate," he added.

"Lord Ashcroft's very generous proposal represents the best way of attaining both these objectives. I am extremely grateful to him."

Ashcroft donated one million pounds towards the six-million dollar construction cost of the Bomber Command Memorial, which opened in 2012 and is dedicated to the 55,573 bomber aircrew who died in WWII.