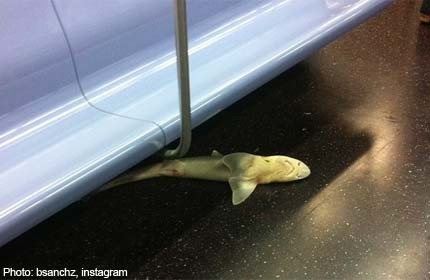 NEW YORK CITY, New York - Beachgoers came forward on Thursday with a plausible explanation for why a dead shark turned up in a New York subway train two days before.

The fishy-smelling one-metre critter caused an Internet stir after it was discovered - and duly photographed by commuters - on a Queens-bound N train.

"I have no idea how it got there or how long it had been there," one rider, Ms Isvett Verde, told local TV station WABC after tweeting her snapshot of what she called "that poor strap-hanging dead shark".

One wag went so far as to pose the shark with a cigarette, a can of Red Bull energy drink and a yellow MetroCard transit pass.

On Thursday, Gothamist.com said it got an email from a New Yorker who received text-messaged photos at work earlier on Tuesday of his young daughter at Coney Island beach - holding what appeared to be the same shark.

It had apparently washed up on the sun-kissed beach, where it quickly became a prop for souvenir snaps.

"My neighbour, who took the photo, texted me to say how 'boss' my daughter was by holding the shark while the boys in the group were afraid to even get close," said the man, identified only as Domenick.

"Our neighbour and my kids took some pictures with it and then a guy took the shark with him," he told the blog.

The neighbour, Ms Alicia Vicino, told Gothamist.com that she was convinced it was the same shark - not least because she knew the Queens-bound N train begins its journey at Coney Island.

"We were cracking up when we saw it on the news. We said, 'That's our shark!'," Ms Vicino said.

The Metropolitan Transportation Authority, which runs the New York subway system, said it threw the shark away in the garbage after the train reached its final destination of Astoria, home of New York's seafood-loving Greek community.