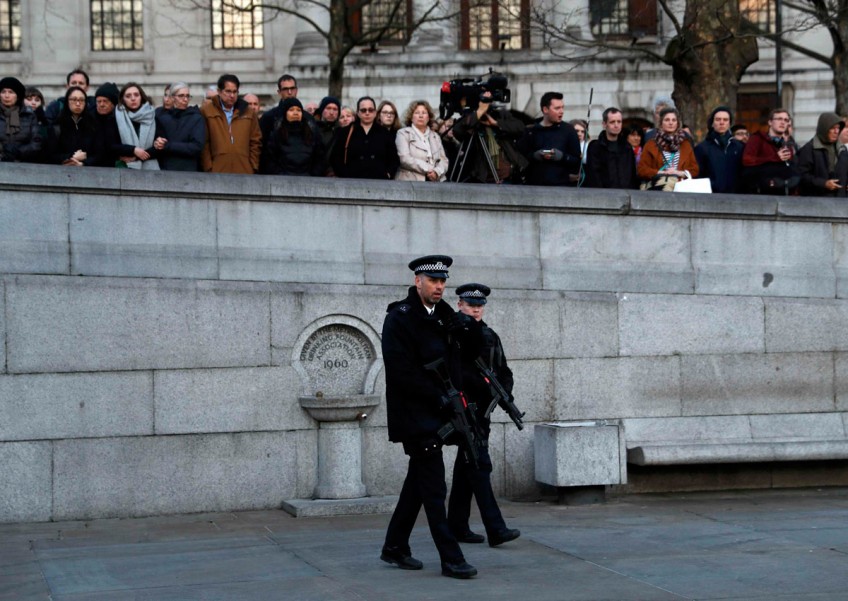 Armed police officers patrolling at a vigil in Trafalgar Square the day after an attack, in London, Britain, on March 23, 2017.
Reuters

A day after a terror attack unfolded on British Parliament grounds on Wednesday, Singaporeans in London said life is back to normal - with a greater security presence.

While some in London said they will avoid the Westminster area, travel agencies here said customers have not called to cancel trips since the news of the attack.

A car had ploughed into pedestrians as it sped across Westminster Bridge before crashing into railings just outside Parliament, where the driver then stabbed and killed a policeman, before other policemen shot him dead.

The incident, which took place around 2.40pm UK time (10.40pm in Singapore), left four dead, including the attacker, and about 40 others injured.

Mr Aakash Sardana, 23, who stays across the River Thames from the Houses of Parliament, off the foot of the bridge, said he had not realised the sounds he heard on Wednesday afternoon were gunshots.

But friends started asking if he was all right after the attack. He said: "I looked outside, and it seemed that the whole area had been cordoned off by the police."

The London School of Economics and political science student added: "On another day, it could have been me on that bridge."

Initially, businesses were closed and there were cordons at two junctions of Belvedere Road, where he stays.

But the cordons have since been removed, and he said there have been few inconveniences.

His fears were also allayed by the "large police presence", and the atmosphere has been "surprisingly calm".

Mr Jason Hong, 24, noted the "increased security presence around major public areas like Kings Cross" right after the incident, adding that he will not let the attack affect his daily life.

"People are obviously concerned, but there has been no outright panic among Londoners," said the Durham University student, who is visiting friends in London.

Consultant Jonathan Neo, 25, said security near his office in the Canary Wharf area is tighter as cars leaving and entering the area are checked. University College London student Liew Wan Jane, 24, said she will avoid the affected area.

Singapore travellers have not called to cancel or reschedule trips to the affected city, said travel agencies such as ASA Holidays.

Ms Jane Chang, head of marketing communications at Chan Brothers Travel, said it has no travellers in London now, although groups are scheduled to head there next week.

"We have not received requests for cancellations or calls of concern (from these customers)," she said.

She added that Chan Brothers is monitoring the situation closely, keeping in touch with ground operators.

"Necessary changes to the itinerary will be made in order to keep our travellers safe," she said.

Ms Alicia Seah, director of public relations and communications at Dynasty Travel, said it has not received trip cancellation requests either.

While the firm has free-and- easy customers in Britain, they are safe and their itineraries are "going on as per normal".