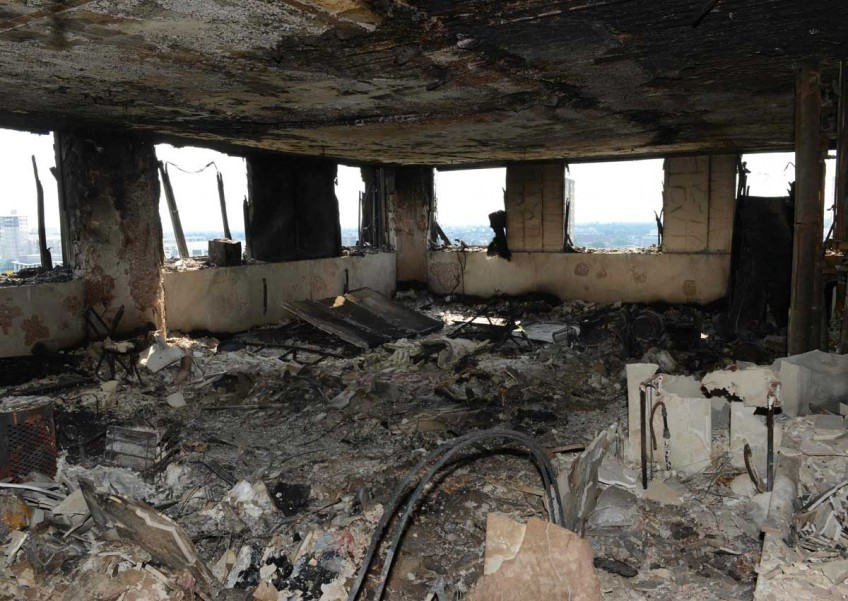 Handout picture released by the Metropolitan Police showing the inside of the Grenfell Tower in west London on June 16, 2017 after a fire engulfed the 24-storey building on Wednesday.
AFP

LONDON - London's mayor said Sunday that the Grenfell Tower fire, in which 58 people are presumed dead, was caused by "mistakes and neglect", as he acknowledged growing public frustration and anger.

Sadiq Khan visited a church near the burnt-out residential tower to attend a service which remembered victims of Wednesday's tragedy, when a 24-storey social housing block went up in flames.

He admitted the local community, a working-class enclave in one of Britain's wealthiest districts, was feeling "frustrated and angry" at the official response to the disaster.

"There is a feeling from the community that they've been treated badly because some of them are poor," Khan said.

The tragedy was a "preventable accident that didn't need to happen and the tragedy we're seeing is because of the consequences of mistakes and neglect from the politicians, the council and the government".

The 1974-built concrete tower had recently been fitted with new exterior insulation cladding, which many locals blame for spreading the inferno so quickly.

Prime Minister Theresa May has announced a judge-led public inquiry into the disaster.

In parallel, the police are seeking to identify if any criminal offences had been committed.

Finance minister Philip Hammond said the inquiry would examine whether the regulations banning certain types of cladding were right and whether they were complied with.

Father's Day cards were among the tributes left close to the blackened shell of the tower on Sunday.

Firefighters leaving the scene were greeted by cheers and applause.

A minute's silence will be held at 11:00am (1000 GMT) across Britain on Monday to remember the victims.

Of the total 58 people missing presumed dead by police, there are at least 30 confirmed deaths.

The bodies of 16 people have been taken to a mortuary, 15 who died at the scene and one who died in hospital.

Only one victim has been formally identified so far: 23-year-old Syrian refugee Mohammad Alhajali.

He came to Britain in 2014 with his older brother Omar.

Alhajali was a civil engineering student at West London University and lived on the 14th floor.

The Home Office interior ministry has made contact with his family and is assisting them in travelling to Britain.

Omar - who was with his brother in the flat - survived the fire after they were separated on the way out.

The Sunday Times described the disaster as "a massive safety failure" and "avoidable".

"For those victims not to have died in vain, we have to make sure that nothing like this ever happens again," the broadsheet said.

The Sun called the inferno "the most unforgivable tragedy of our age.

"The anger that such an appalling thing could happen in a modern capital city is entirely justified." The Sunday Telegraph urged May to communicate leadership.

"After a tragedy of truly national dimensions like this, the prime minister cannot simply behave like a grey-faced executive at a company who has been confronted by a public relations foul-up."

Meanwhile pop music mogul Simon Cowell was organising a recording Sunday of Simon and Garfunkel's hit "Bridge Over Troubled Water" in a bid to raise money to help those caught up in the blaze.