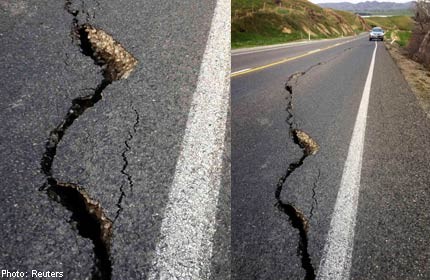 A crack in a road is pictured after an earthquake on the outskirts of the town of Seddon in the Marlborough region, on New Zealand's South Island August 16, 2013.

WELLINGTON - A powerful earthquake rattled major cities across New Zealand on Friday, terrifying residents and causing the capital Wellington to shake "like jelly", but authorities reported no major damage.

The 6.5-magnitude quake struck at 2:31 pm (0231 GMT) in the Cook Strait, the US Geological Survey said. It was felt from Christchurch in the South Island to Auckland in the North Island.

The USGS, which initially measured the quake at 6.8 magnitude, said it hit five kilometres (three miles) east of the town of Seddon at a relatively shallow depth of 9.9 kilometres, close to the centre of a series of quakes last month.

A cluster of major aftershocks measuring up to 5.7 followed but no tsunami alert was issued.

The tremor caused a violent jolt in Wellington, where office workers dived for cover under their desks.

"Lots of aftershocks. 'Beehive' wobbling around like a jelly, but all OK," Economic Development Minister Steven Joyce tweeted, referring to New Zealand's distinctive parliament building in the capital.

Local resident Juli Ryan tweeted: "That was pretty wild, I was sitting in my parked car watching buildings shake like leaves."

There were reports of power cuts to areas of the South Island, and Wellington's airport was briefly closed to check the runway for damage.

Train services were also stopped in case rails had buckled in the quake, but police said they had received no reports of significant injury or damage.

Lifts were out of action in some office buildings and, as the aftershocks continued, many businesses sent their workers home early on Friday afternoon, causing large traffic jams in the capital.

'This area in particular is very active in the last couple of months. This is a continuation of that activity," a seismologist from Geoscience Australia told AFP, noting that a 6.5-magnitude quake in the same area on July 21 had caused damage.

There have been hundreds of aftershocks since the July quake, with residents fearing a repeat of a devastating quake that hit Christchurch in February 2011, killing 185 people.

Wellington was the scene of the country's most powerful earthquake in 1855.

That 8.2-magnitude quake caused four deaths and changed the city's entire geography, pushing the shoreline out 200 metres (660 feet) as it thrust the harbour floor upwards.

New Zealand is on the boundary of the Australian and Pacific tectonic plates, forming part of the so-called "Ring of Fire", and experiences up to 15,000 tremors a year.