MEXICO CITY - A powerful earthquake of magnitude 7.4 struck southern Mexico’s Pacific coast on Tuesday, killing at least five people and cutting off isolated villages, as well as causing damage to buildings hundreds of miles away in Mexico City.

The fatalities were near the quake’s epicentre in Oaxaca, a mountainous state known for its coffee, mescal and Spanish colonial architecture.

Rockfalls blocked the winding mountain roads between the state capital of Oaxaca city and the coast. Rescue workers have not reached all villages reported to have suffered damage, raising fears that more people may be hurt.

A Oaxaca state official said rescue workers were trying to get to the settlement of Santa Catarina Xanaguia, near the epicentre, where the quake brought down homes or parts of the mountainside, trapping people.

People had sent messages for help by phone, the official added.

A clinic and old churches in hill villages near the epicentre were severely damaged, images on social media showed.

The dead included a worker from state oil company Pemex, who fell from a height. Pemex was forced to briefly shutter the country’s biggest oil refinery in Oaxaca. 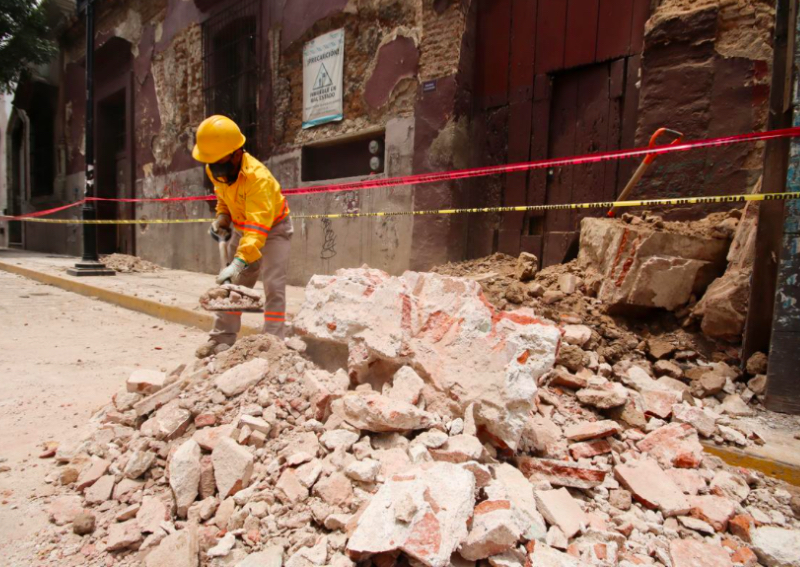 A worker removes debris from a building damaged during a quake, in Oaxaca, Mexico, on June 23, 2020.  PHOTO: Reuters

Miguel Candelaria, 30, was working at his computer in his family home in the Oaxaca town of Juchitan when the ground began to tremble.

He ran outside with relatives, but they had to stop in the middle of the street as the pavement buckled and rocked.

“We couldn’t walk... the street was like chewing gum,” said Candelaria, 30.

Quakes of magnitudes over 7 are major earthquakes capable of widespread, heavy damage.

In Mexico City, buildings shook strongly and people ran into the streets when an early warning seismic alarm sounded.

Two people were injured and more than 30 buildings in the capital suffered damage, officials said, including buildings still scarred from a 2017 earthquake that killed 355 people in the capital and the surrounding states.

Water from rooftop pools or tanks cascaded down residential buildings in the city, and construction workers on the 56th story of a new residential tower clung to each other as it swayed, images on social media showed.

The ocean receded on Oaxaca’s Pacific coast and the U.S. National Oceanic and Atmospheric Administration warned of a possible tsunami as far away as South America but later said the danger had passed. 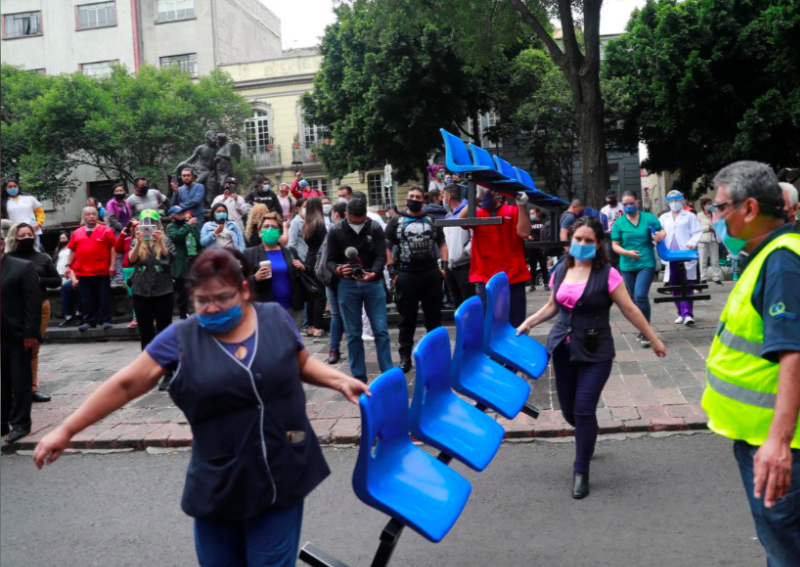 Patients and medical staff are seen outside a hospital after an earthquake in Mexico City, Mexico, on June 23, 2020. PHOTO: Reuters

The U.S. Geological Survey said the epicentre of Tuesday’s quake was located 69 km northeast of the town of Pochutla. It was very shallow, only 26 km below the earth’s surface, which would have amplified the shaking.

Near to the epicentre, Magdalena Castellanos Fermin was in the village of Santiago Astata when the “really intense” quake struck, sending large rocks tumbling down from the hillside and alarming residents, she told Reuters by telephone.

Eunice Pineda, a 26-year-old teacher in Juchitan, said the quake “was two minutes of torture,” as she feared her house would collapse.

But residents in one of Mexico’s most seismically active regions have learned to “live one day at a time,” Pineda added.

“We learn to appreciate, to treasure every moment,” she said.