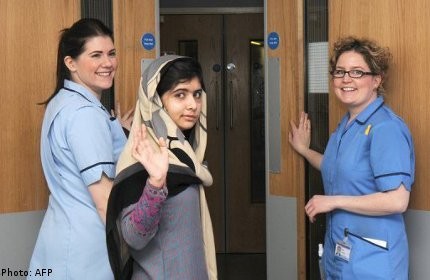 The queen and her husband Prince Philip will host the event promoting education in Commonwealth countries on October 18.

"We understand that Malala Yousafzai will be attending the Commonwealth Universities and Education Reception at Buckingham Palace," a palace spokesman said.

Academics and teachers will be among the guests at the October 18 event. The announcement is the latest in a series of impressive accolades for Malala's campaign for girls' schooling.

The 16-year-old is also among the favourites to win the Nobel Peace Prize, which will be revealed on October 11.

During an interview with the BBC's Panorama programme to be aired later Monday, Malala said that winning the peace prize would be "a great opportunity" but that universal education remained her true goal.

The teenager told of her plans to return to Pakistan, but only when she had received a full education and was "fully empowered", and described the Taliban's rule of fear which had led her to speak out in the first place.

"The Taliban's punishments were like slaughtering people on the Green Chowk (the main square in Malala's home town of Mingora), throwing acid on women's faces or abusing them or killing them," she said.

"I was afraid of my future. And at that time there was fear all around us, in every street and in every square of Mingora."

Despite the threats, her father Ziauddin admitted that the family was still shocked by the attack on his daughter.

"We know the Taliban strikes hundreds of schools but they never targeted a child," he told Panorama.

"We really didn't expect (the attack) because we thought that they might have some values, terrorists might have some code of conduct," he added. Malala will publish on Tuesday her autobiography "I am Malala: The Girl Who Stood Up for Education and Was Shot by the Taliban".

Malala's first thought was "Thank God I'm not dead" as she woke up terrified in a British hospital after a Taliban gunman shot her in the head, according to extracts from the book published in the Sunday Times newspaper.

The schoolgirl added that she was unable to talk, had no idea where she was and was unsure even of her own name when she emerged from a coma after six days.

The last thing she recalled on October 9, 2012, the day she was shot, was sitting with her friends on a bus as it rounded an army checkpoint on the way to school in the insurgent-riddled Swat Valley in northwest Pakistan.

Friends told her that a masked gunman boarded the bus, asked "Who is Malala?" and then lifted a gun to her head and fired.

Gravely wounded, the Pakistani schoolgirl was flown to Britain for surgery. She returned to school in England last March after recovering from her injuries.