The public response to the deadly bombing at the Manchester Arena on Monday (May 22) showed the best of Britain, declared British Prime Minister Theresa May.

In the face of atrocities by the terror attack that killed 22 including children and left over 60 injured, the leader said in defiance: "The attempt to divide us met countless acts of kindness that brought people closer together."

Tales of bravery, heroic acts and kindness emerged on social media as many rallied to help the petrified thousands who were trapped in the horrific aftermath of the impact of reportedly nail bombs detonated by suicide bomber Salman Abedi.

Here are some of the heartwarming stories that have touched the hearts of many:

Chris Parker, 33, who had been begging in the arena foyer where the bomb went off, was hailed as a hero after he was seen cradling a dying woman in his arms.

"She passed away in my arms. She was in her 60s and said she had been with her family," Parker said.

"I haven't stopped crying," said the man who has slept rough in Manchester for about a year.

Parker recounted how the impact of the blast knocked him to the floor. Instead of running away, his "gut instinct was to run back and try and help", he told the Press Association news agency.

"I wrapped her in one of the merchandise T-shirts and I said 'where is your mum and daddy?' She said: 'my dad is at work, my mum is up there'."

He said he thought the mother had died.

He told ITV television: "It was a lot of children with blood all over them, crying and screaming, We were having to pull nails out of their arms and a couple out of this little girl's face."

Crowdfunding for heroes too

As funds poured in to help victims, members of the public have also raised thousands of pounds to pay the two men back for their heroic acts.

AFP reported another fund-raising campaign by Michael Johns, who felt compelled to help "one of our most vulnerable in society who showed great selflessness and courage".

Said Jones: "There's a lot of good people with Manchester who help us out and we need to give back too."

Ariana Grande's quick-thinking mother Joan reportedly ushered terrified fans to safety backstage after the blast was first heard at her daughter's concert, according to TMZ.

Joan, who sat on the front row, rushed to the aid of fans scrambling for safety.

Some concert-goers said Joan called as many as 10 children to follow her backstage where she and members of the security team took care of them until they could leave the venue.

Her actions won praise on Twitter from fans of the singer.

The BBC reported that taxi drivers took children and families wherever they needed to go - for free.

Many claimed they were sent home by a Muslim or Sikh driver who didn't charge them and thanked them on Twitter.

Said one Sikh driver: "I've had people who needed to find loved ones. I've dropped them off to the hospital. They've not had any money, they've been stranded."

Co-owner of Street Cars Manchester Sam Arshad told NBC News he contacted his drivers and asked them to pick up as many people in need of rides home or to the hospital as possible.

He said he told his drivers: "This is our city, at the end of the day … money's not everything, do you know what I mean?"

All of them agreed.

Residents open homes and shops to those seeking refuge

Many Manchester residents reportedly opened their homes to hundreds of stranded children seeking refuge from the carnage.

In the wee hours after the blast, people used the hashtag #RoomForManchester to offer spare rooms, reported BuzzFeed News. 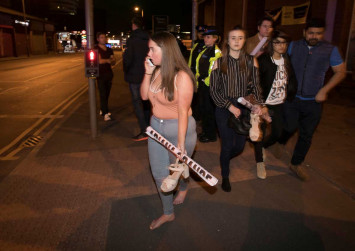 Hotels also offered to help in any way they could.

On Twitter, Andy Leeman thanked one hotel for looking after his 10-year-old niece and her best friend.

Jackie Goodwin tweeted that her sandwich shop would offer hot drinks and sandwiches to police officers and ambulance staff working through the night to help the victims.

A Rabbi from a synagogue was seen handing out coffee to police officers.

He told BuzzFeed News: "Every race, every religion, every colour, we stand together for kindness and goodness and denounce this terrible act."

Even a phone store offered to let people charge their phones or call a loved ones.

Sikh temples in Manchester and those nearby have offered food and shelter to people left stranded by the bombing.

In his tweet, a member of the Sikh community, Harjinder Kukreja, said: "Sikh Temples in Manchester offering food and accommodation. They are open for ALL people."

An Everything's 13 representative told Metro.co.uk: "The Sikhs Gurus ordered Sikhs to ensure people have access to basic needs and freedom from oppression.

"It is up to modern day Sikhs to ensure this continues and it is heartening to see the younger generation taking this responsibility, as we saw when many took to social media to encourage people to use Manchester's Gurdwaras for shelter, as well as in the actions of Sikh taxi drivers who offered free rides across the city."

The suspect and the victims

Islamic State had claimed responsibility for the Manchester attack, the deadliest in Britain since July 2005 when four British Muslim suicide bombers killed 52 people in attacks on London's transport network.

The suspected suicide bomber who killed the 22 people on Monday was identified as 22-year-old Salman Abedi.

Authorities said it was likely he did not act alone.

It is believed Abedi had recently returned from Libya and probably travelled to Syria as well.

The victims included an eight-year-old girl, two teenage girls and a 28-year-old man.

A Polish couple who had come to collect their daughters after the concert also perished.

The daughters were safe, reported Reuters.

The bombing also left more than 60 people wounded, some with life-threatening injuries.

Hospitals are treating 64 individuals, 20 of whom require critical care.

Jon Rouse, chief officer for health and social care services in the Greater Manchester area, told Sky News: "There is damage to major organs, major injuries in terms of limbs and some of these individuals are going to need very long term care and support. These are highly traumatic injuries."