Manchester, United Kingdom - Days after a bomb ripped through the Manchester Arena, locals take their seats at a comedy club where British humour is helping people cope with the aftermath of the terror attack.

"It's important to have a bit of humour when you're dealing with real-life stress and challenging events, because it helps people deal with it in a way, it's like a coping mechanism," said Cate Gardner, who had come to the Frog and Bucket comedy club to celebrate her birthday.

"Instead of crying, it's better to laugh in a way, because you just sort of get through it, and you help others get through it and it's how you move forward," she told AFP, while at the bar people bought jugs of beer as they waited for comedians to hit the stage.

Humour made a cautious appearance just hours after the attack, as poet Tony Walsh spoke of Manchester's habits and great history at a vigil held in the city's Albert Square.

Hushed laughter broke the silence of the crowd, which was followed by huge applause at the end of the poem.

David Perkin, director of the Frog and Bucket, said humour had for generations been sought as a way to "soften" problems.

"British humour will always respond to anything, whether it's a good thing or a bad thing," he told AFP.

Perkin recalled crowds arriving at the club's previous venue in the wake of the 1996 Irish Republican Army bomb which injured more than 200 people in Manchester.

"The Frog reopened on the Monday night and people were queueing to get in to hear the comedians take the mick about the IRA bomb."

The attack at a concert by US pop star Ariana Grande on Monday last week killed 22 people and left more than 100 injured, prompting British Prime Minister Theresa May to raise the country's threat level to "critical".

The move was met with jest on Twitter, with social media users adopting the hashtag "British Threat Levels" to describe the moments that would really terrify them.

"Eye contact on the Tube," wrote one user of etiquette on the London underground.

"We're British. I don't get scared until the threat level hits 'Replacement Bus Service'," wrote another in reference to train travel disruptions.

Satirical website The Daily Mash joked about the prime minister's decision to have the army take on police work, by quoting a fictional serviceman.

"Soldier Tom Logan said: 'I have no experience of investigating break-ins, so what I'll probably do is point my gun at people and ask them if they did it'," the website wrote.

For those at the comedy club over the weekend, jokes were seen as a way of helping the nation come to terms with its worst terror attack in more than a decade.

"No matter what goes on in life, I think it's always good to lighten things and just enjoy laughter and enjoy your life," said Christian Bajda, at the Frog and Bucket with friends. 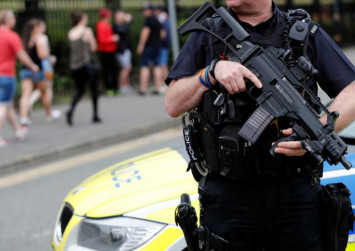 Although the audience was determined to enjoy their night despite the ongoing terror investigation, jokes about the attack would not be heard on stage.

"There is a timescale and certainly a period where something is so raw, and so emotive, that you can't touch it really," said comedian Steve Royle ahead of his performance.

Perkin agreed it would be some time before audiences would be ready to laugh about the attack.

"I can remember when Princess Diana died, it was really quite a while before people could really see a lighter side to things that have happened," he said.

"It will take time, but they will find the good northern backbone to take the mick out of something that's happened."

When comics do eventually turn their attention to the bombing, Perkin said they would steer clear of the attacker Salman Abedi and the victims: "It will be more about people's reactions and how they can find the humour in that and seeing the good side out of a terrible situation."

Royle pointed to the 2010 film "Four Lions", a dark comedy about a group of British would-be jihadists, as one example of how jokes can be made about terrorism.

With the bombing kept off the script at the Manchester comedy club, the audience chatted excitedly as they awaited the first jokes of the night.

"There's been many disasters suffered by this great city, but the humour will always win out in the end," said Perkin.

Read Also
After Manchester bombing, one mum pens an inspiring letter to her baby 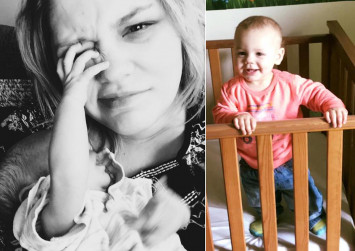