Mandela 'steadily improving' as he turns 95 in hospital 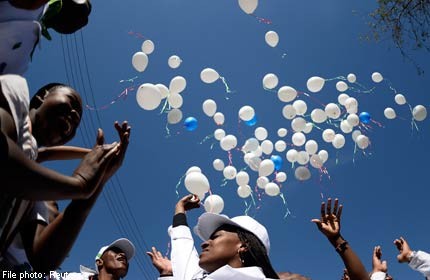 US President Barack Obama led a stream of birthday wishes for the ailing peace icon, who was admitted to hospital with a recurring lung infection on June 8, as people from around the world prepared to honour his legacy with charitable acts.

"Madiba remains in hospital in Pretoria, but his doctors have confirmed that his health is steadily improving," the government said in a statement, using Mandela's clan name.

"We are proud to call this international icon our own as South Africans and wish him good health," he said in the statement.

Children in schools around the country were to kick off the celebrations by singing "Happy Birthday" to Mandela, on a day that also marked the 15th anniversary of his marriage to third wife Graca Machel.

Obama, who visited South Africa last month but was unable to see Mandela because of his illness, was fulsome in his praise of the former statesman, referring to him by his clan name, Madiba.

"Our family was deeply moved by our visit to Madiba's former cell on Robben Island during our recent trip to South Africa, and we will forever draw strength and inspiration from his extraordinary example of moral courage, kindness, and humility," Obama said in a statement.

The US president called on people to honour the former prisoner by taking part in Nelson Mandela Day and carrying out volunteer work in his name.

Biker gangs will clean the streets, volunteers will paint schools and politicians will spend 67 minutes on worthy projects - all to mark Mandela's 67 years of public service.

"Let us return Madiba's sacrifices and contributions through our own efforts to build a better society," Zuma said.

Near Pretoria, Zuma himself will try to channel Mandela's cross-community appeal by delivering government housing to poor whites.

The government will also host a ceremony for the symbolic handing over of Mandela's new high-tech ID card, which will be received by Mandela's youngest daughter Zindzi.

The event is laden with symbolism in a country where apartheid was enforced by pass books, which black citizens were forced to carry and which limited movement to certain areas at certain times.

The United Nations declared the Nobel Peace laureate's birthday Mandela Day in 2010, but for many this year it takes on extra poignancy.

The former South African president has spent the last 41 days in a Pretoria hospital in critical but stable condition.

Family and friends have said he is now responding to treatment and breathing with the aid of a machine.

Zindzi on Wednesday said her father was making "remarkable" progress in hospital.

"He responds very well... with his eyes, and he nods and sometimes he lifts his hand like to shake your hand," she told Britain's Sky News.

"There was a time that we were all extremely anxious and worried, and we were prepared for the worst," said Zindzi. "But he continues to amaze us every day."

Global luminaries, pop stars and ordinary people around the world have joined South Africans in pledging support for Mandela on his birthday.

"I will also be giving my 67 minutes to make the world a better place, one small step at a time," British business magnate Richard Branson vowed in a recorded message.

On Saturday, the Australian city of Melbourne will hold a concert featuring local and African artists, while a music festival later this year in Norway will promote equality in schools.

Born on July 18, 1918, Mandela fought against white rule in South Africa as a young lawyer and was convicted of treason in 1964.

He spent the next 27 years in jail.

It was in part through his willingness to forgive his white jailers that Mandela made his indelible mark on history.

After negotiating an end to apartheid, he became South Africa's first black president, drawing a line under centuries of colonial and racist suppression.

He then led reconciliation in the deeply divided country.

"Never before in history was one human being so universally acknowledged in his lifetime as the embodiment of magnanimity and reconciliation as Nelson Mandela," said retired archbishop Desmond Tutu, himself a Nobel Peace laureate.

But the sunset of Mandela's life has been somewhat eclipsed by bitter in fighting among his relatives.

A row over his final resting place has seen three of his children's graves dug up and their remains moved amid public brawling and legal action among his children and grandchildren.