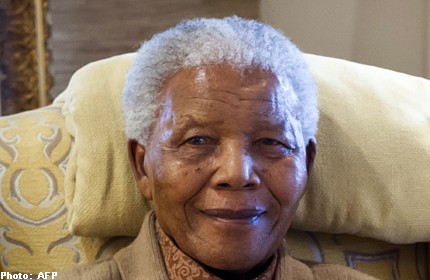 JOHANNESBURG - Nelson Mandela is "unstable" at times but has shown "great resilience" as he remains in a critical condition in hospital, South Africa's presidency said Saturday.

"While at times his condition becomes unstable, the doctors indicate that the former president has demonstrated great resilience and his condition tends to stabilise as a result of medical interventions," a statement said.

The ailing 95-year-old anti-apartheid icon, fondly known by his clan name "Madiba", was hospitalised in Pretoria on June 8 with a recurring lung infection.

"Doctors are still working hard to effect a turnaround and a further improvement in his health and to keep the former president comfortable," President Jacob Zuma's office added.

Presidency spokesman Mac Maharaj did not elaborate further on his condition.

In late June, Zuma cancelled a trip abroad after Mandela's health deteriorated but on Saturday he will travel to Malaysia for an official visit as planned.

While there, he will also receive a peace award on Mandela's behalf.

Zuma urged South Africans to continue praying for Mandela and to keep the country's first black president constantly in their thoughts.

The presidency is the official channel for public updates about Mandela's health, and had not issued a statement since August 11.

Then, Mandela was said to be making "a slow but steady improvement" but that he remained critically ill.

His youngest daughter Zindzi Mandela said two days earlier that he was able to sit up unaccompanied and was "more alert, more responsive".

At the end of July, Zuma's office said Mandela was continuing to show signs of improvement after scares were reported.

US television network CBS said Mandela had undergone a surgical procedure to unblock a dialysis tube.

The broadcaster also reported occasions of Mandela having not responded to his medicines and his life support machine having shown distress.

Mandela has faced several health scares in recent years and his lung problems date back to his 27 years in apartheid jail.

His current hospitalisation is his longest since he walked free from jail in 1990 and went on to become the country's first leader to be elected in all-race elections.

Absent for years from public life, South Africans have become more familiar with his frailty but his latest ill health prompted a groundswell of wellwishers to outside his hospital.

His 95th birthday last month was marked by charitable deeds, with many people offering 67 minutes of service for the 67 years he was in public service.