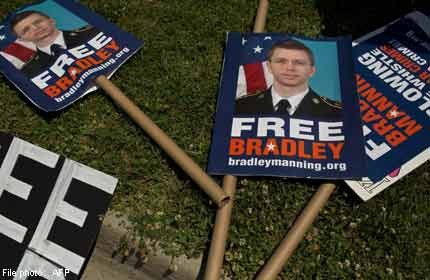 Signs lay on the ground at rally was held in support for PFC Bradley Manning on June 1, 2013 in Fort Meade, Maryland.

FORT MEADE - A military judge will rule Thursday whether to drop some of the charges against Bradley Manning, the American soldier who admitted giving a massive cache of secret documents to WikiLeaks.

As the espionage trial enters its final stage, Manning's defence lawyer, David Coombs, renewed his request Monday for the judge to throw out several counts - including the most serious charge that the US Army private "aided the enemy" - on grounds the prosecution has failed to provide incriminating evidence.

Apart from the aiding the enemy count, the defence has asked Judge Denise Lind to dismiss charges that Manning committed computer fraud by allegedly exceeding his authorised access and that he allegedly stole government property in his document dump.

The former intelligence analyst in Iraq already has pleaded guilty to 10 lesser offences, acknowledging that he passed hundreds of thousands of military intelligence reports and State Department diplomatic cables to WikiLeaks in the biggest leak of classified files in American history.

But the trial is focused on whether Manning broke rules governing the use of his computer, violated the Espionage Act by leaking sensitive information that could harm US national security and had the intention of assisting Al-Qaeda through his disclosures.

Coombs said the government has not offered "any evidence" to show that Manning knew the leaked files could fall into the hands of Al-Qaeda militants.

To say that "he should have known" was not sufficient, Coombs said.

"There should have been something more than simply that," he added, contending that the government had advanced the charge to "put a hammer down on any whistleblower or anybody who wants to put information out."

The judge has said the government must prove Manning had "actual knowledge" that his leak would aid the enemy, either directly or indirectly.

The defence says Manning already had access to the data he downloaded because of his job as an intelligence analyst and that he used the Wget programme simply to speed up the download.

Manning, 25, faces a possible life sentence on the aiding the enemy charge and a total of more than 140 years if found guilty on all counts.

The prosecution rested its case after five weeks and the defence presented its case in three days of testimony last week.

The judge also is due to rule on the scope of the prosecution's planned "rebuttal" to the evidence put forward by the defence.

Manning has become a folk hero to his supporters who see him as a crusading whistle-blower trying to expose the excesses of US foreign policy.

But his critics say Manning betrayed his soldier's oath and portray him as a reckless traitor who undermined US diplomacy and endangered lives with his disclosure to WikiLeaks.