Many others flew same route in week before crash 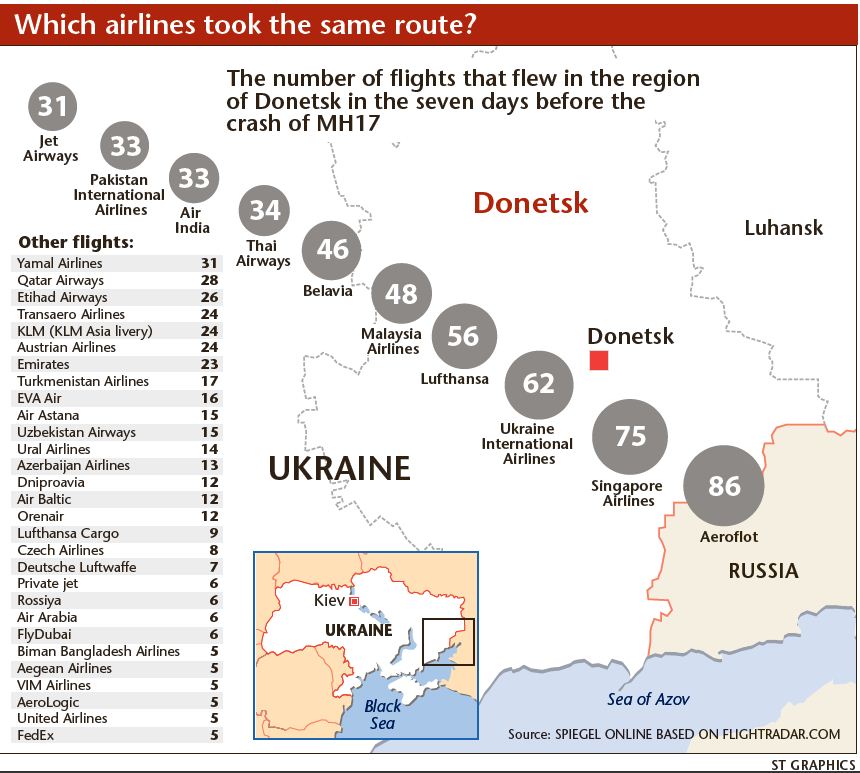 Malaysia Airlines Flight MH17 was not alone while flying over a conflict zone in eastern Europe last Thursday before it was apparently shot down.

Based on information from flightradar24.com, a website that shows air traffic in real time, there were at least 10 other carriers in the area, including Singapore Airlines, Germany's Lufthansa, Air India and Thai Airways.

Since the crash of MH17, these airlines have come under fire for having used the route even as the conflict in Ukraine between the government in Kiev and pro-Russia rebels grew.

While there were no flight restrictions over Ukraine, some travellers pointed out that months back, other carriers such as Australia's Qantas and Korean Air chose to stop flying over the territory.

SIA was also criticised for its social media postings in the wake of the tragedy, which claimed 298 lives, mainly Dutch nationals.

A few hours after MH17, which was flying from Amsterdam to Kuala Lumpur, was reported to have gone down, SIA posted on its Facebook page: "Customers may wish to note that Singapore Airlines flights are not using Ukraine airspace."

This prompted a flurry of comments from netizens, many of whom accused SIA of being "insensitive" for not offering its sympathies first.

Others said the carrier should have made it clear that it had stopped flying over Ukraine only after the crash, instead of being vague about it.

An hour and a half later, the airline put out a second post, which read: "Our thoughts are with the passengers and crew of MH17 and their families."

Even after this, many continued to hit out at the carrier, while others defended SIA.

"I don't see how the (first) update was insensitive. I see it more of a reassurance instead of being some business play," wrote netizen Eng Su Yee Aeth.

In response to queries from The Sunday Times, SIA admitted it could have handled the matter in a more sensitive way.

In comments that also went up on its Facebook page, the airline said it was aware its posts "may have come across as insensitive to some".

A spokesman added: "We recognise that the information could have been better communicated and we sincerely apologise if it had offended our customers and anyone else in the online community."

She reiterated: "We are deeply saddened by what has happened to Malaysia Airlines Flight MH17. Our thoughts remain with the families and loved ones of the passengers and crew who perished on board."

"Customers may wish to note that Singapore Airlines flights are not using Ukraine airspace."