MAS defends decision to divert plane from Ukraine to Syria 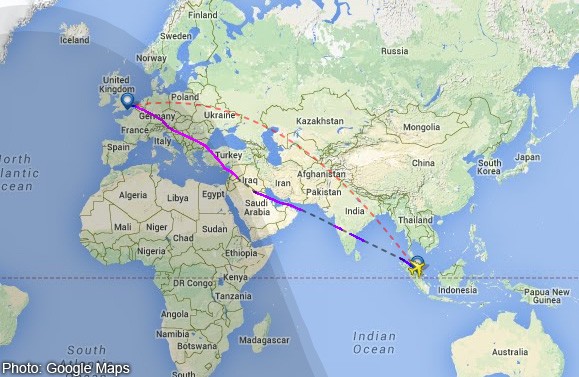 KUALA LUMPUR - Malaysia Airlines has defended itself after confirming that it diverted a London to Kuala Lumpur flight over Syrian airspace when its usual route over Ukraine was closed in the wake of Thursday's MH17 crash.

The flag carrier said in a statement late Monday that MH4's flight path was in accordance with routes approved by the United Nations' aviation agency International Civil Aviation Organisation's (ICAO).

"As per the notice to airmen (NOTAM) issued by the Syrian Civil Aviation Authority, the Syrian airspace was not subject to restrictions. At all times, MH004 was in airspace approved by ICAO," it said.

Dozens of airlines previously flying over crisis-stricken eastern Ukraine abandoned the well-used route between Asia and Europe after MH17 went crashed with 298 people on-board, apparently shot down by a surface-to-air missile. Previous MH4 Airbus A380s have flown over Turkey, according to air traffic tracker Flightradar24.

Flightradar24 posted on Twitter on Monday that Sunday's flight flew over war-torn Syria, where the conflict is raging both on the ground and in the air. "As far as we have seen #MH4 was the only transcontinental flight going over Syria," it wrote on its flightradar24 Twitter account.

MH17 crashed over eastern Ukraine -- where the military has been fighting pro-Russia separatists -- on Thursday on its way from Amsterdam to Kuala Lumpur with 283 passengers and 15 crew aboard. Both the rebels and Moscow deny claims by the United States and Ukraine that MH17 was shot down by the insurgents using a missile system supplied by Russia.

It is the second ill-fated Malaysia Airlines plane this year, after flight MH370 mysteriously disappeared en route from Kuala Lumpur to Beijing on March 8, carrying 239 people. The jet, a Boeing 777-200 like MH17, is believed to have veered off course and crashed in the southern Indian Ocean, but no trace of any wreckage has been found.