Aleksandr Dmitriev plays with his family pet Messi, a two-year-eight-month-old cougar, in the town of Penza, Russia on June 21, 2018.

In the mornings, Aleksandr Dmitriev is woken by his pet cat Messi nuzzling against his neck. Messi loves having his fur combed, and bounding around batting at a large green soft toy.

The twist? Messi is a male puma.

"He is as attached to me as I am to him," said Dmitriev. "He is really a member of the family and perhaps my best friend ever."

Dmitriev and his wife Maria, both psychologists living in the western Russian city of Penza, bought Messi five years ago from a petting zoo in the city.

Named after Argentinian soccer star Lionel Messi, the exotic cat was born in a zoo and later sold to the petting zoo.

The puma was in such ill health when the couple bought him he could barely walk. They had to teach him how to run and jump.

There was also the issue of establishing dominance.

"There was this division of spheres of influence, who is in charge in our family, who has the final word," Dmitriev said. "At that moment we were sorting out the relationship and at the end I won." 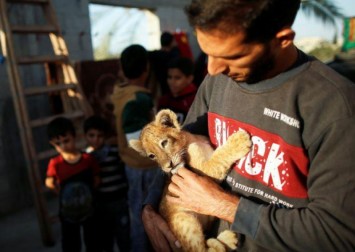 The couple have adapted their house to meet Messi's needs, converting the hallway into his den with walls covered in bamboo to serve as his scratching posts.

Messi is popular with the neighbours and famous on social media, with millions of followers on YouTube and Instagram, after the couple started posting photos and videos of their life with the big cat.

Because of his early health problems, Messi is smaller than the average puma and has never shown any aggression towards humans.

But Dmitriev knows the danger his pet could pose.

"If you live with such a predator, then an attack is inevitable," he said. "Sooner or later when puberty starts, he will be judging who is in charge in the house, and in this situation he will be testing your strength."