Meet these self-made billionaires who were once dirt poor 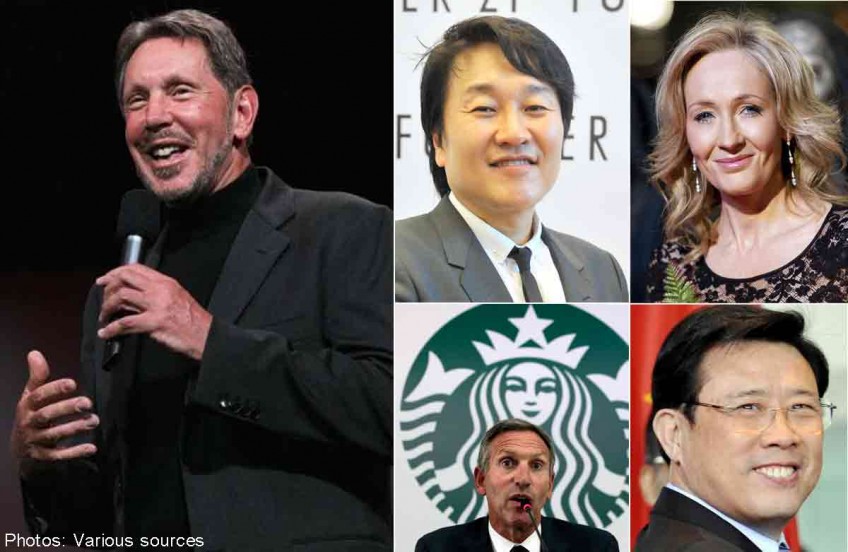 Singapore - Looking at their lives now, it is hard to believe that some billionaires once had tough and humble beginnings.

Some of their rags to riches story may seem unbelievable, but these billionaires had to endure and overcome negativity from their family, poverty and even depression, to find their own inspiration to land them their successful companies and careers today.

CEO and founder of IT company Oracle, Larry Ellison, the world's fifth richest person according to US magazine Forbes, once had to listen to his uncle spew out negativity about his capabilities when he was young. His uncle used to tell the young Ellison, who was given up for adoption to his relatives, that he would never amount to anything, said an article in Mercury News.

After the death of his aunt, Ellison went over to California and worked odd jobs for eight years, said news site Business Insider, before he founded the billion-dollar IT software company, Oracle, with two associates.

Meanwhile, Russian billionaire Roman Abramovich was an orphan with big dreams when he was first starting out and working in a plastic toys company. His first wife, Olga, told British press Daily Mail that Abramovich was an workaholic and always left for work early and came home well past midnight.

Though they were poor and living in a one-bedroom apartment, Abramovich never stopped having dreaming of a better life. His first wife said she used to change gears when they were driving about so Abramovich could feel like he was driving an automatic, instead of a manual car.

Today, the oil tycoon has a net worth of US$10.2 billion (S$12.8 billion), according to Forbes, and owns many luxurious automobiles including the world's second largest superyacht, Eclipse.

Author of the Harry Potter series Joanne Rowling, better known as J.K. Rowling, may be able to buy a castle in Scotland today but just two decades ago, she was a struggling young mother, living on welfare and contemplating suicide.

Upon returning to England after ending her two-year marriage to her foreign husband, Rowling felt like she had hit rock-bottom.

She worked part-time as a secretary for 15 pounds a week (S$30) and supplemented her income with benefits from the government, according to Rowling in a television interview. Her mother was suffering from a chronic illness and she, herself, was clinically depressed.

However, inspired by her daughter, she got her act together and completed a story which had came to her on a train journey. Her story turned into a seven-book series and was a billion success. Even today, Rowling still asks herself if her success was a reality or just a dream, she said in the interview.

These billionaires may be enjoying the best luxuries that life can offer but they never forget how they achieved their success. Find out more inspirational rags to riches stories from these self-made billionaires.