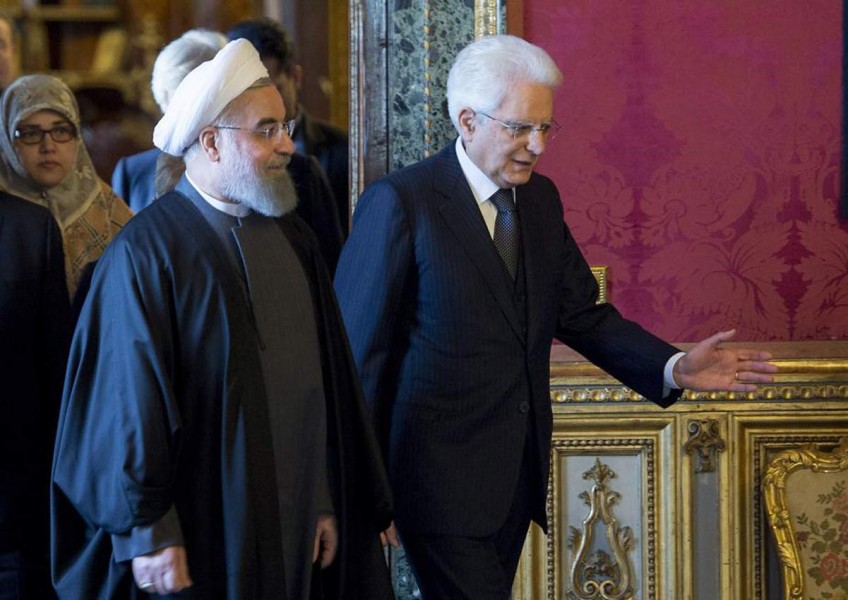 ROME - Italy and Iran signed billions of dollars of business deals on Monday at the start of a visit to Europe by Iranian President Hassan Rouhani aimed at rebuilding his nation's ties with the West after years of economic sanctions.

Heading a 120-strong delegation of business leaders and ministers, Rouhani will spend two days in Rome before flying to France on Wednesday, looking to polish Tehran's diplomatic credentials at a time of turmoil in the Middle East.

An Italian government source said the Iranians would sign up to 17 billion euros ($18.4 billion) worth of deals in sectors from energy to infrastructure and from steel to shipbuilding.

"This is just the beginning of a journey. There are sectors where we must work closer together," Italian Prime Minister Matteo Renzi said, standing alongside Rouhani.

"I am sure this visit will be a fundamental part of our ability to overcome together the challenge of fighting terrorism, atrocity and evil that we all have to confront together," Renzi added, referring specifically to Islamic State militants, who oppose Iran and the West in equal measure.

Rouhani had originally been due to visit Europe in November but cancelled the trip after an Islamic State attack on Paris, which killed 130 people.

"We have always been in the front line against terrorism ... we have to continue (cooperating with Italy) to secure a genuine peace in Afghanistan, Syria, Lebanon, Libya," the Iranian president said, speaking through a translator.

Many Western nations have accused Iran of funding various militant groups, and despite a landmark nuclear deal between world powers and Tehran last year, the United States is keeping some of its financial sanctions in place because of the alleged links and human rights abuses.

This will complicate Iran's full return to international markets, but judging by the Italian and French businesses lining up to clinch deals there is an enormous appetite in Europe to revive old trade ties and boost the sluggish economy.

A pragmatist elected in 2013, Rouhani championed the 2015 accord under which Iran curbed its nuclear programme in return for the end of UN, EU and some US sanctions this month.

He is anxious to bring Western knowhow and products back home to prove to Iranians that the accord, contested by many hardliners, will help ease their prolonged economic hardships.

Iran announced plans at the weekend to buy more than 160 European planes, mainly from Airbus (AIRP.PA).

Among the deals struck on Monday were a pipeline contract worth between $4 billion and $5 billion for oil services group Saipem (SPMI.MI), up to 5.7 billion euros in contracts for Italian steel firm Danieli (DANI.MI) and up to 4 billion euros of business for infrastructure firm Condotte d'Acqua.

Italian business leaders, including the heads of oil firm Eni (ENI.MI) and carmaker Fiat Chrysler Automobiles (FCHA.MI), attended a dinner for Rouhani on Monday. At the request of the Iranians, no wine was to be served. France refused the same request so there will be no state dinner for Rouhani in Paris.

While Italy was not involved in the prolonged nuclear talks, France was, and it took a hard line toward Tehran in the negotiations. It has also been outspoken in its condemnation of Iran's support for Syrian President Bashar al-Assad and sceptical of the country's other Middle East interventions.

This is likely to make Rouhani's visit to France later this week more prickly than his stay in Italy.

"Trust needs to be built. It's like love. It is only the proof of love that counts," said a senior French diplomat.

The boss of oil group Total (TOTF.PA), Patrick Pouyanne, is among top French executives who are expected to hold one-on-one meetings with Rouhani.

The Iranian leader is due to address up to 500 Italian business leaders on Tuesday before meeting Pope Francis, who is likely to discuss peace prospects for the Middle East and raise the question of human rights in Iran.

[[nid:251052]]
SUBSCRIBE TO OUR NEWSLETTER
Your daily good stuff - AsiaOne stories delivered straight to your inbox