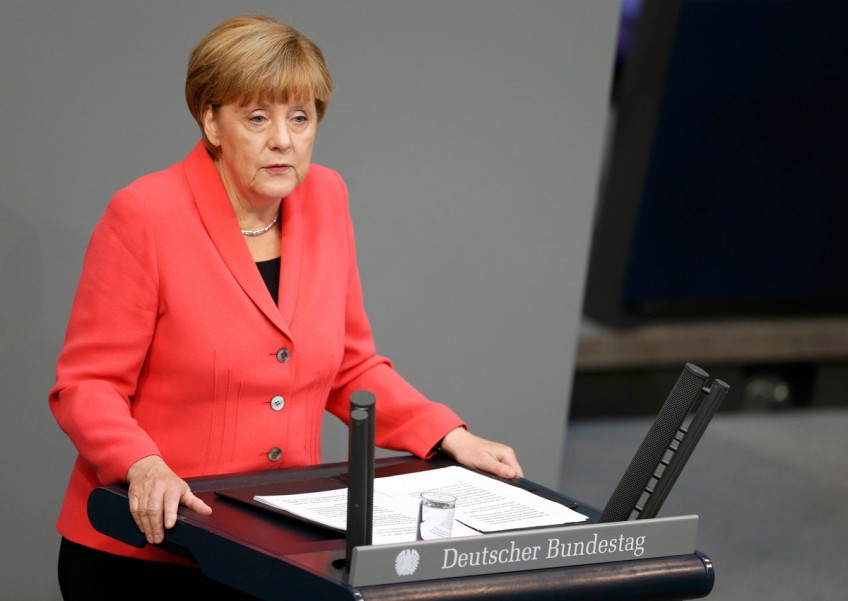 COLOGNE, Germany - German Chancellor Angela Merkel was due in Istanbul Sunday to press Turkey to stem the flow of migrants into Europe, a day after a German mayoral candidate was seriously wounded in a "racist" stabbing.

Her meeting with Turkish President Recep Tayyip Erdogan, who has heaped scorn on Europe's efforts to deal with the crisis, comes with her government's migrant policies fuelling growing tensions in Germany, triggering a backlash from her conservative allies and spawning a growing number of increasingly vocal far-right protests.

She has pushed for a fairer distribution of people across the European Union, but the crisis has sorely tested ties between member states and put unprecedented strain on the right to free movement that is at the core of the 28-nation bloc's values.

On Saturday, Merkel expressed "shock" over the attack in the western city of Cologne which left mayoral hopeful Henriette Reker with serious neck wounds.

Reker, an independent close to Merkel's ruling Christian Democrats who is active in helping refugees, was stabbed while at a party information stand in the city.

Four other people were also injured, one of them seriously, with regional police chief Wolfgang Albers saying it was a "political act".

The attacker was arrested at the scene and told police he had "a racist motivation for committing this act", Cologne police official Norbert Wagner said at a news conference.

More than 630,000 people fleeing war and misery in the Middle East and Africa have landed on Europe's shores this year.

Most of the refugees and migrants are trying to get to Germany, Europe's economic powerhouse, which has said it expects up to one million asylum seekers this year after saying it would open its doors to Syrian refugees.

As a result of the influx, German authorities have warned in recent weeks of a rise in unrest, with the country's domestic spy chief saying last month, "what we're seeing in connection with the refugee crisis is a mobilisation on the street of right-wing extremists, but also of some left-wing extremists".

Long-dormant protest movement PEGIDA, radicalised by Germany's record influx of refugees and migrants, turns one year old next week and is also back in the headlines.

Last week, one PEGIDA protester carried a mock-gallows with the names of Merkel and her deputy, despised by the protesters as "Berlin dictators" and "traitors" for their open-door policy to refugees.

Of those making the trip to Europe, many have attempted risky sea crossings from Turkey to Greece and, highlighting the human cost of the crisis, another 12 people drowned on Saturday when their wooden boat sank off the Turkish coast as they were trying to reach the Greek island of Lesbos, Turkey's Anatolia news agency reported.

Slovenia, meanwhile, said Saturday it was drafting in the army to help police cope with an expected influx of thousands of migrants arriving after Hungary shut its border with Croatia overnight in its latest hardline move to stop the flow of people.

Croatia began ferrying migrants by bus and train to Slovenia on Saturday, away from the Hungarian frontier, and the Slovenian government said 2,700 men, women and children had entered its territory by late Saturday.

"They announce they'll take in 30,000 to 40,000 refugees and then they are nominated for the Nobel for that. We are hosting two and a half million refugees but nobody cares," Erdogan said.

The comment appeared to be a jab at Merkel, who had been tipped as a Nobel Peace Prize contender earlier this month, in part over her welcoming stance to the refugees.

Turkey's demands in return for helping to stem the migrant flow into Europe include three billion euros (S$4.7 billion) in aid and an easing of visa restrictions.