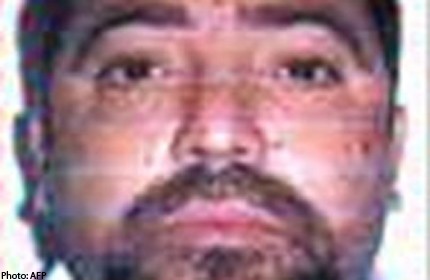 MEXICO CITY - Mexico said it had captured the leader of the country's Gulf drug cartel on Saturday, in a new blow to the criminal groups that have terrorised the country for years.

The interior ministry said in a brief statement that soldiers captured Mario Ramirez Trevino, described as "the head of a criminal organisation that operated in the north of the country," in an operation on Saturday morning.

The is the second major success against the drug cartels for President Enrique Pena Nieto after the arrest last month of Miguel Angel Trevino, the head of the paramilitary Zetas cartel.

Pena Nieto, who took office in December 2012, has pledged to reduce drug-related violence that has resulted in more than 70,000 murders since 2006.

Ramirez Trevino was captured in Rio Bravo, a town on the border with Texas, according to a justice source in the northeastern state of Tamaulipas. Mexican military helicopters buzzed across the region on Saturday.

The United States had offered a $5 million reward for information leading to Ramirez Trevino's arrest. The Gulf cartel boss is charged with several US federal offences, including facilitating the trafficking of cocaine and marijuana shipments from Mexico into the United States.

The interior ministry said it would hold a press conference on Sunday to discuss the details of his arrest.

Military checkpoints were set up outside Rio Bravo and the nearby border town of Reynosa, while soldiers and marines patrolled the streets, local media reported. Soldiers also took control of the international airport at Reynosa.

Ramirez Trevino, thought to be 51, became head of the once-powerful Gulf cartel after its former leader, Jorge Eduardo "El Coss" Costilla, was arrested in September 2012.

In recent months he reportedly asserted his leadership over the Gulf cartel organisation by crushing a rival faction.

The Gulf cartel originally hired the Zetas - elite anti-drug commandos that deserted and turned to the dark side - to work as their enforcement arm. But the Zetas turned on their employers in 2010 and in a series of bloody turf battles took over most of their territory.

The Zetas now battle the western Sinaloa Federation for control of the major drug trafficking routes to the United States. The Sinaloa gang is headed by Joaquin "El Chapo" (Shorty) Guzman, Mexico's most wanted man.

The captured former head of the Zetas, Miguel Angel Trevino, alias "Z-40," is currently being held in a maximum security prison in Mexico.