Mexico shocked by attack on sailors at Polish beach 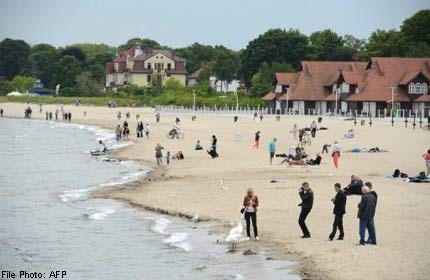 People relax on the beach on the Baltic Sea on June 7, 2012 in Sopot neer Gdansk.

MEXICO CITY - Mexico voiced concerns to Poland on Monday after a video surfaced of an alleged group of football hooligans mobbing Mexican navy cadets resting on a Polish beach.

The Mexican foreign ministry said in a statement that 57 cadets and officers from the Cuauhtemoc training ship were taking a break on a Baltic Sea beach on Sunday when they were assaulted by some 300 "alleged fans of a football team."

The brawl left 17 Mexican sailors injured, including two who were taken to a hospital before being declared out of danger, the statement said, adding that six Mexicans were temporarily detained.

A video on the Reforma newspaper website shows a group of men in swim trunks and shaved heads suddenly rushing toward the Mexicans, throwing punches and kicks at the shipmen.

Mexico said its embassy in Warsaw delivered a diplomatic note to the Polish foreign ministry asking "for its intervention in order to ensure that authorities find those responsible for the deplorable incident and punish those guilty."

The Polish ambassador to Mexico, Anna Niewiadomska, was summoned to the Mexican foreign ministry to express "the concern of the Mexican government over this deplorable and serious event."

The foreign ministry said the cadets are training on the Cuauhtemoc, which is "sailing around the world with a message of peace and friendship, and it will continue to do so."