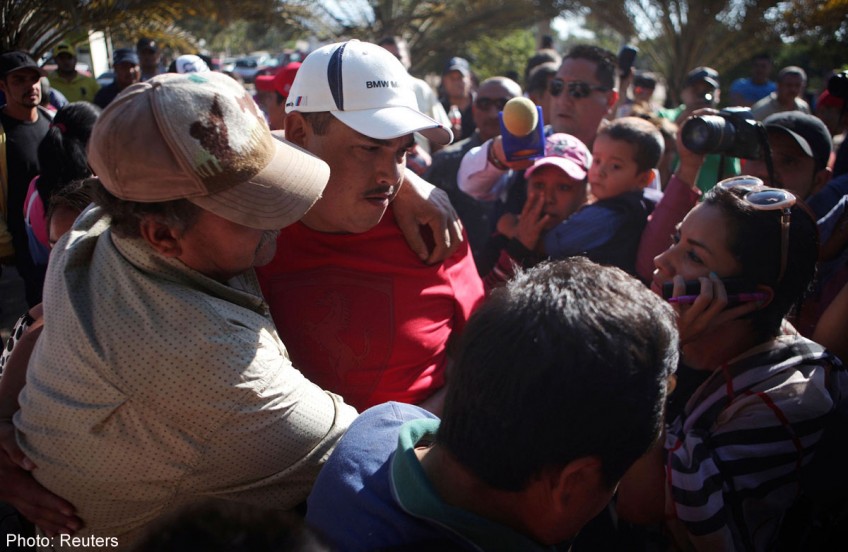 Vigilante leader Luis Antonio Torres, alias "El Americano" (C), is embraced by a supporter as he and other vigilantes voluntarily surrender to state authorities to cooperate in a shootout investigation in the town of Buenavista Tomatlan, Michoacan December 30, 2014.

MEXICO CITY - The founder of a vigilante group in Mexico's restive western state of Michoacan was arrested on Saturday along with 26 followers for their alleged role in 10 deaths during a shootout with a rival group last month.

The shootout took place in La Ruana, a town about 150 miles (241 km) from Morelia, the state capital, leaving 11 dead, including Mora's son. Both men and 35 others were brought in for questioning in December.

A state judge said on Saturday that enough evidence pointed to the involvement of Mora and his men to go ahead with the legal process, noting that the bullets that killed some of the victims matched the caliber of arms used by Mora's group.

Mora has three days to appeal and the court has until Monday to reach a decision on Torres and his followers, the judge said.

Michoacan has been torn by violence, prompting President Enrique Pena Nieto to send reinforcements to the state to wrest away control from a powerful drug gang last year. He forged an uneasy alliance with vigilante groups to restore order.

The unrest in Michoacan follows rising anger about a lack of security in Mexico, where the abduction and presumed massacre of 43 trainee teachers has sparked protests across the country.