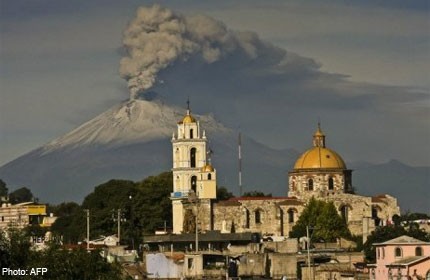 PUEBLA, Mexico - A handful of US flights were cancelled or delayed at two Mexican airports on Friday after ash from a nearby volcano fell in central Mexico, authorities said.

Alaska Airlines voluntarily cancelled a flight from Los Angeles to Mexico City's international airport and the later trip back to California, airport spokesman Jorge Gomez told AFP. The rest of the airport, however, operated normally.

The small airport of the central city of Puebla, located just 25 kilometers (15 miles) from the Popocatepetl volcano, closed for several hours amid the presence of ash on the runway, airport authorities said.

The temporary closure affected 800 passengers after five flights were scrapped, a spokesman for the federal airports agency ASA told AFP.

An American Airlines plane to Dallas, Texas, took off eight hours late, according to the flight tracker on the carrier's website.

Two cargo flights were also affected, ASA said, adding that clean up crews were deployed to pick up ash from the runway and roads.

The Popocatepetl volcano has been rumbling periodically since May, spewing huge columns of ash that prompted several US airlines to cancel dozens of flights into and out of Mexico City last week.

Last Saturday, authorities raised the alert level around the volcano to Yellow Phase III, one notch below evacuations of residents who live near the 5,452-meter-high (17,887-foot-high) "Popo," as it is locally known.

The Mexican capital is only 55 kilometers (35 miles) from the snow-capped volcano.

In its latest bulletin, the National Disaster Prevention Center reported that the volcano had spewed steam and ash accompanied by medium intensity explosions early Friday that blew glowing rocks up to two kilometers from its crater.