MH17 crash: No agreement yet on security zone for crash site in east Ukraine 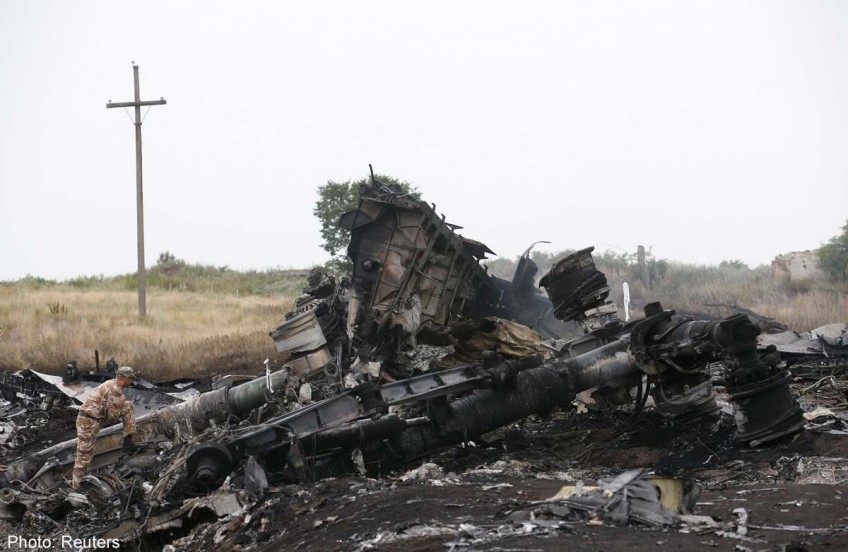 DONETSK, Ukraine - Rebels and international observers have yet to agree on a security zone around the site where a Malaysian airliner crashed in eastern Ukraine, they said on Saturday, complicating efforts to secure evidence.

Ensuring the security of the site, where all 298 passengers were killed when the Boeing 777 crashed, is crucial to preserving evidence needed to piece together what, and who, caused it to plunge into the steppe on Thursday.

Earlier, Valentyn Nalyvaichenko, head of Ukraine's security service, was quoted as saying talks between officials from Russia, Ukraine and the Organisation for Security and Cooperation in Europe were continuing on setting up a 20 square km region to help "a humanitarian mission" to move the bodies.

"We agreed on the 20 square km, a concrete zone, and we hope the terrorists will allow us to work," Ukraine's UNIAN news agency quoted him as saying.

Sergei Kavtaradze, a senior official of the pro-Russian rebels' self-proclaimed Donetsk People's Republic, said despite the discussions, no agreement had been reached.

"There is no security zone. It is in a region near the front. There is military activity there," Kavtaradze told Reuters.

A spokesman for the OSCE security watchdog, Michael Bociurkiw, said he was not aware of any agreement yet on the security zone, but this was "definitely one of the top issues".