SYDNEY - The search for flight MH370 is taking place over one of the most harsh and isolated points on the planet, in a patch of southern Indian Ocean from where Antarctica beckons.

Australian-led efforts to find the Malaysia Airlines Boeing 777, which vanished on March 8 with 239 people on board, are concentrated on a stretch of water 2,500 kilometres (1,500 miles) southwest of Perth.

It is little traversed by maritime traffic, and when alerts went out to merchant shipping in the area on Tuesday, the nearest vessel was two day's journey away.

It is also windy, lashed by huge waves.

"Very harsh conditions, once you get there the influence of Antarctica... starts to come clearly on the ocean," said Erik van Sebille, an oceanographer at Sydney's University of New South Wales.

Van Sebille, who was on a research ship in the area in December, said even in calm conditions the place was challenging and with the southern hemisphere's autumn approaching, it was set to deteriorate.

"It's not an area where you would like to be for a very long time, to spend weeks searching for a plane," he told AFP.

Nathan Bindoff, professor of physical oceanography at the University of Tasmania, said: "The Indian Ocean sector is a region that has strong winds and big waves.

"It is the windiest sector of the southern ocean."

Bindoff said vessels typically saw only one other ship on a 50-day voyage in the area, and then most likely closer to Antarctica and its research bases than the area where the potential wreckage was spotted.

"In some ways there are more eyes near Antarctica than there are in this part of the southern ocean," he said. 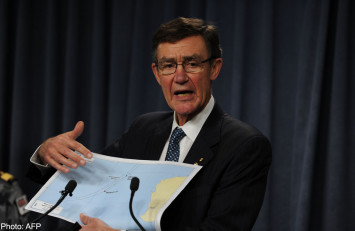 The strength of the currents could also hamper efforts to find any wreckage, the oceanographers said, with satellite imagery of the potential debris showing the objects awash, bobbing in the sea where waves can be towering.

"So you have very, very strong winds there, quite high waves. You've got among the strongest currents in the world," said van Sebille.

He said any wreckage from the plane could already be 1,000 kilometres from where the jet hit the water, making the job of backtracking to the crash site from the debris sighting even more difficult.

The search for MH370 has been compared to that of an Air France jet that crashed into the Atlantic Ocean in 2009 with the loss of 228 lives.

But the head of the investigation into that accident, Alain Bouillard, has reportedly said this search is much more difficult given that French officials knew the precise location of AF447 four minutes before impact.

Australian authorities have cautioned against presuming the objects in the water belong to the missing Malaysian plane.

"It could just be a container that has fallen off a ship, we just don't know," Prime Minister Tony Abbott said Friday.

However, Van Sebille said there was rarely too much debris in the area of this search.

"It's a pretty pristine part of the ocean which indeed means that if this is debris... it's highly likely either from the plane or it comes from some ship in the ocean itself, and there's not a lot of shipping going on," he said.

"It's really off the beaten track," agreed Tim Huxley, chief executive of Wah Kwong Maritime Transport Holdings in Hong Kong of the search zone. "It's a lonely, lonely place down there."