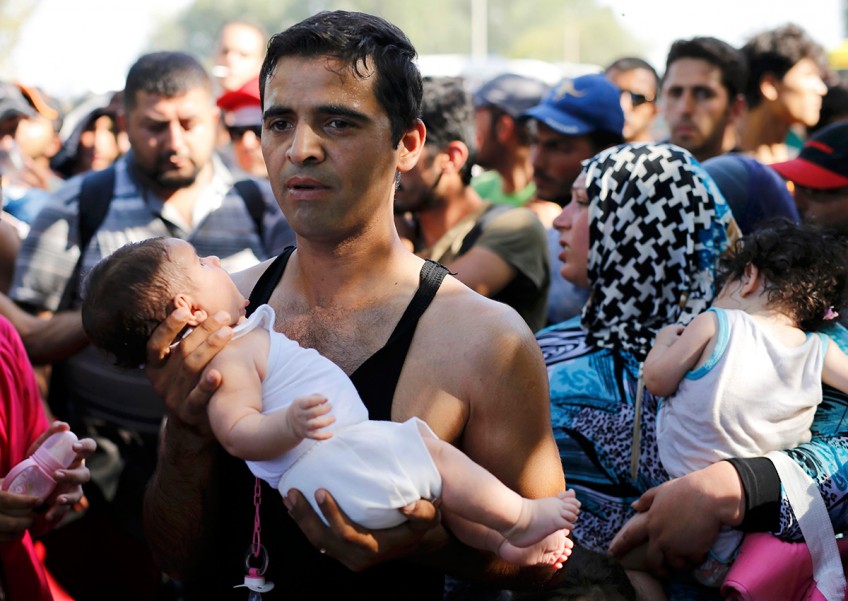 TOVARNIK, Croatia - Thousands of migrants poured into Croatia on Thursday, quickly overwhelming authorities, who warned the country had limited capacity to cope with an expected influx of 20,000 over the next two weeks.

Meanwhile, in a sign that pressure was growing on the EU's other borders, Bulgaria began deploying 1,000 troops to the Turkish frontier where several hundred people spent a third day stuck in border city Edirne.

A day after Hungarian riot police fired tear gas and water cannon in several hours of clashes with rioting migrants on the border, Croatia said that 6,200 migrants had arrived in the past 24 hours, as they seek a new route into northern Europe.

A special train transporting 800 arrived near Zagreb from the border early Thursday, but thousands more were waiting for trains in baking sun at a tiny station near the Serb frontier, an AFP correspondent said.

"We've talked to police many times and they won't let us go," said Syrian Abdullah Janabi, 22. "We have money, passports. We can pay for buses and hotels but they trap us here. It's like we're in prison." "This is bullshit. We are happy to pay. Why are they keeping us here?" When a rumour spread that a train was coming, thousands of migrants - men, women and children -- leapt to their feet, pressing against the railway line, but it proved to be a false alarm.

The UN's refugee agency put the numbers waiting at the station at between 4,000 and 5,000. Large crowds jostled for food and water from a small Red Cross team at the scene.

"It is very hard to say if this will become the next transit camp. It is down to the Croatian government how it deals with this," said Jan Kapic, a UNHCR spokesman.

And Bozo Galic, head of the eastern county where Tovarnik is located, described the situation there as a "humanitarian disaster," state-run HINA news agency reported.

"We will be very constructive and cooperative (regarding migrants) but emphasise that there are limits to our capacities," Croatian Prime Minister Zoran Milanovic told a cabinet meeting.

Only a day earlier as the first few hundred arrived, Milanovic had said the EU member - which is however not in the passport-free Schengen Zone - would allow free passage "where they apparently wish to go".

Health Minister Sinisa Varga meanwhile predicted on Thursday that 20,000 would arrive in the coming two weeks.

Hungary, which until sealing its border with Serbia this week, had seen more than 200,000 migrants enter the country this year, angrily rejected criticism of its handling of Wednesday's clashes which left 14 police injured.

Furious migrants had torn down the wire meshing separating them from Hungarian territory, and police battled for hours with dozens of migrants, some of whom threw stones, sticks and plastic bottles.

"Such aggressive people as seen yesterday will never be let into Hungary. Hungary will defend itself," said Foreign Minister Peter Szijjarto, calling the international reaction "bizarre and shocking".

UN Secretary-General Ban Ki-moon on Wednesday said he was "shocked" by Hungary's actions, saying people "fleeing war and persecution... must be treated with human dignity."

Serbian Prime Minister Aleksandar Vucic condemned the "brutal behaviour" of Hungary's police, saying he would not "allow anybody to humiliate us and fire tear gas on Serbia's territory." The situation at the flashpoint Roszke crossing was calm early Thursday, AFP reporters said. Some 400 migrants had slept in sleeping bags on the road, while others had spent the night in neighbouring fields.

In Turkey, some 500 migrants spent another night in a makeshift camp on the main road into Edirne, sealed off by police to refugees on Tuesday.

The refugees see the route through Edirne as offering a better chance of survival than boarding an overcrowded boat to a Greek island.

A further 500 people spent the night in Istanbul bus station, where refugees have been barred from boarding buses to the border.

Germany reported a sharp rise in migrant arrivals on Wednesday to 9,100.

Almost all crossed from Austria, with 2,000 by train and the rest by road or on foot, three days after Germany - which expects 800,000 arrivals this year - introduced passport checks on borders.

The situation is adding to pressure for an EU summit to come up with solutions to the continent's worst migration crisis since World War II.

The bloc is bitterly split and free movement across borders - a pillar of the European project - in jeopardy.

One of the big fears is for the future of Europe's 20-year-old Schengen agreement, which allows borderless travel between some member states, and is considered as important as the euro by many EU supporters.

Germany, Austria and Slovakia have all reimposed identity checks on parts of their borders, and Poland and the Netherlands are considering whether to follow suit.

EU President Donald Tusk was expected to announce a decision on Thursday on whether to call the meeting of the bloc's 28 leaders, an idea supported by German Chancellor Angela Merkel.

The European Parliament on Thursday backed plans to relocate 120,000 refugees around the EU, raising pressure on eastern members of the bloc - including Hungary - to drop their opposition to mandatory quotas.