BARCELONA - A British-Australian boy aged seven who had been reported as missing by his grandfather was killed in the vehicle rampage in Barcelona, his family and Spanish officials said Sunday (Aug 20).

Julian Cadman was among 14 people killed in the twin assaults in Spain, according to Catalonia's civil protection agency, which also confirmed on Twitter the deaths of an Italian and a Belgian national.

In a heart-wrenching statement, Julian's family described him as "a much loved and adored member of our family".

"As he was enjoying the sights of Barcelona with his mother, Julian was sadly taken from us.

"He was so energetic, funny and cheeky, always bringing a smile to our faces. We are so blessed to have had him in our lives and will remember his smiles and hold his memory dear to our hearts," they said, thanking those who helped in the search for the boy.

"We will not be making any further comments on this tragedy and ask everyone, especially the media, to give us the privacy we need to grieve away from the public eye."

Julian's grandfather Tony Cadman had posted a Facebook appeal seeking him after a van on Thursday ploughed into crowds on Barcelona's Las Ramblas boulevard which was packed with tourists. 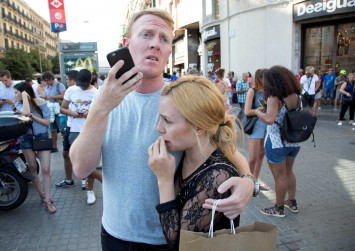 The boy, who was on holiday in Barcelona for a family wedding, had been separated from his mother, who was found in a hospital in a serious but stable condition.

Explaining the delay in announcing the death, a Catalonian health department source said the child's identity could not be confirmed until his father arrived from Australia and was informed about the death.

Sunday's confirmation by emergency services brings the total number of victims identified to 12.

Besides the Australian-British child, they include four Spaniards, two Portuguese, two Italians, an American, a Spanish-Argentinian and a Belgian.

Among the 126 people injured in the twin attacks, 51 are still hospitalised, including 10 in a critical condition and 13 in a serious state.