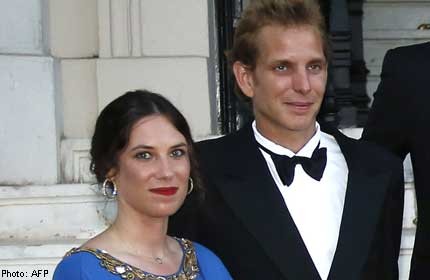 MONACO - Andrea Casiraghi, eldest son of Princess Caroline of Monaco, is to marry his Colombian girlfriend on August 31, the royal palace announced Wednesday.

Casiraghi, 29, already has a child with the wealthy heiress and socialite Tatiana Santo Domingo, who gave birth to their son Sacha in London in March.

New York-born and raised in Switzerland and France, Santo Domingo, 29, is the grand-daughter of Julio Mario Santo Domingo, a Colombian tycoon who died in 2011 and was one of the richest men in the world.

The announcement of a date for the marriage of a couple who first met as teenagers at school near Paris had been widely anticipated.

The palace did not release any further details of the wedding plans.

Casiraghi is the nephew of Monaco's ruler, Prince Albert II, and a grandson of the former sovereign Prince Albert and his American actress wife Grace Kelly.

Casiraghi is currently second in line to succeed Albert II, behind his mother Caroline. The wedding will make Sacha third in the order of succession.

Prince Albert and his 35-year-old wife Charlene, the South African swimmer he married in 2011, have no children.

Albert, 55, has admitted fathering a daughter and a son with two other women but, since they are considered illegitimate, they have no claim to the throne.

Her relationship with French comedian Gad Elmaleh became public earlier this year and photographs of the couple on holiday on the Italian island of Capri this month confirmed rumours that the 27-year-old is expecting.