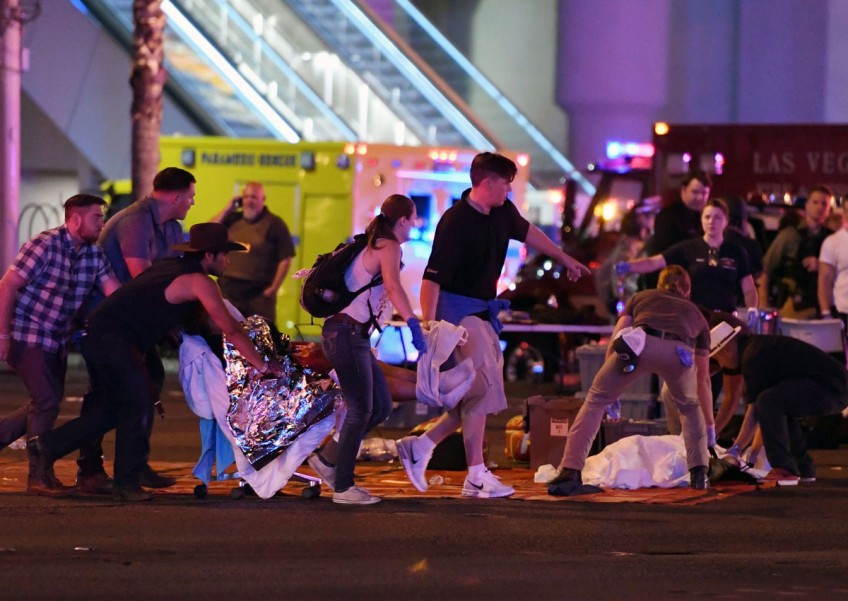 An injured person is tended to in the intersection of Tropicana Ave. and Las Vegas Boulevard after a mass shooting at a country music festival nearby on October 2, 2017 in Las Vegas, Nevada.
AFP

Los Angeles - A gunman killed at least 20 people and wounded more than 100 others Sunday when he opened fire on thousands of fans at a country music concert on the Las Vegas Strip.

The gunman, who police said was a local man, was killed after being "engaged" by officers who responded to reports of multiple gunfire from the 32nd floor of the Mandalay Bay, a hotel-casino next to the concert venue in the gambling hub.

Revelers screamed and fled in panic as a steady stream of automatic gunfire rang out at the venue shortly after 10:00 pm local time (0500 GMT Monday), footage captured on smart phones showed.

"We have in excess of 100-plus injured and excess of 20-plus that have died at this point," Las Vegas Metro Police Sheriff Joseph Lombardo told an early morning press conference.

Two of those killed are believed to be off-duty police officers, said Lombardo.

"This is an ongoing investigation, but we are comfortable that the primary aggressor in this event ... has expired or passed away, and is no longer a threat," he added.

Thousands of fans were attending the concert next to the Mandalay Bay which was part of a three-day country music festival known as Route 91.

Witnesses told how the gunman opened fire with an inital long burst, and then appeared to reload as he continued his spree.

"We heard (what) sounded like a glass breaking, so you looked around to see what's going on and then heard a pop, pop, pop," Monique Dekerf told CNN.

"You'd think for a moment okay we're fine, there's no more gunfire, then it starts again." Her sister Rachel said it sounded like "the shots were coming from the right side ... it sounded like they were right beside us too ... it was right there."

Best-selling country singer Jason Aldean was on stage and near the end of his concert when the shooting began.

"We were watching the concert having a great time, then we heard what sounded like firecrackers," witness Joe Pitz told the local Las Vegas Sun news outlet.

"I guess it was an automatic weapon going off but it literally sounded like firecrackers.

"Then soon enough there was commotion on the Mandalay Bay side of the stage. They were motioning for medics to come and safety people to come and Jason Aldean ran off the stage.

It was the deadliest shooting in the United States since 49 people were killed at the Pulse nightclub in Orlando, Florida in June 2016.

It was also the latest in a series of recent deadly attacks at concert venues.

Twenty-two people were killed while leaving a concert in the northern English city of Manchester in May when a suicide bomber detonated a nail bomb in the foyer.

Ninety people were killed in November 2015 at the Bataclan venue in Paris during a concert by the US band the Eagles of Death Metal.

At least two people killed with several injured after a shooting at a concert in Las Vegas.https://t.co/5EOndn2tkj

Lombardo would not release the gunman's name, but told reporters that he has been identified and is a local resident.

The sheriff however issued an appeal for information about his female travelling companion, identified as Marilou Danley.

"We have not located her at this time and we are interested in talking to her for follow-up," Lombardo said.

"We are pretty confident there is no longer a threat other than we are attempting to locate the person of interest.

"It's on ongoing investigation. Right now, we believe he is the sole aggressor at this point." A shocked Aldean told his fans via Instagram that he and his band was safe.

"Tonight has been beyond horrific," the singer wrote.

"I still dont know what to say ... My Thoughts and prayers go out to everyone involved tonight.

"It hurts my heart that this would happen to anyone who was just coming out to enjoy what should have been a fun night."