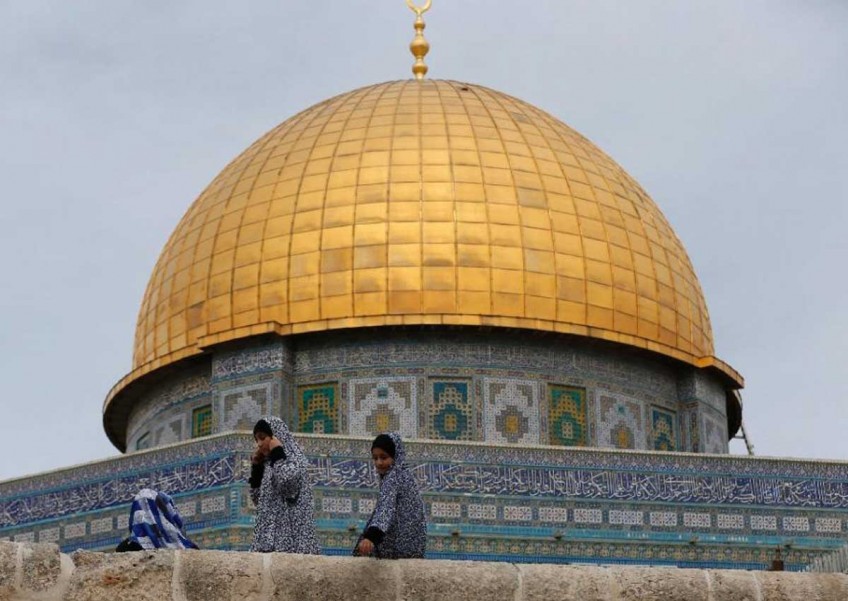 A surge of violence in the conflict showed no sign of abating as Palestinians, most of them teenagers from the powder-keg city of Hebron, staged more lone-wolf knife attacks against Israeli soldiers and clashed with troops in the occupied West Bank.

Stabbings and violent protests have become daily occurrences since simmering tensions over the status of the Al-Aqsa mosque compound in Jerusalem's Old City boiled over in early October, leaving scores dead.

On Monday night, Israel said it carried out an air strike against two Hamas targets in the Gaza Strip after a rocket fired from across the border crashed into an open field, without causing any injuries.

However the measure, which US Secretary of State John Kerry described as a "game changer", quickly hit its first obstacle.

The Jordanian-run trust which administers the site, known as the Waqf, complained that when its officials showed up to install the cameras early on Monday, they were blocked by Israeli police.

"We consider the matter evidence that Israel wants to install cameras that only serve its own interests," said Waqf.

Israeli Prime Minister Benjamin Netanyahu hit back in a statement, arguing arrangements to install the cameras "were supposed to be coordinated at the professional level".

When announcing the agreement, Kerry said Jordanian and Israeli technical teams would have to meet to discuss its implementation.

Netanyahu's statement highlighted this comment by Kerry after the swift attempt by the Jordanian Waqf to install cameras on Monday morning.

"The cameras will be installed according to the arrangements to be determined between the parties," it said.

Sheikh Azzam al-Khateeb, head of the Waqf, said it was King Abdullah who had made the decision to go ahead with the installation.

"There is no other authority in the mosque except the administration of the Jordanian Islamic Waqf... no one has the right to (carry out) this action except the Waqf administration," Khateeb told AFP.

The Al-Aqsa mosque compound is in east Jerusalem which was seized from Jordan in the 1967 war. While Amman has retained custodial rights over the holy sites, Israel controls access.

The compound is considered the third holiest site in Islam and is revered by Jews as their holiest site, known as the Temple Mount.

Palestinians want the status quo to revert to what it was in 2000, when Jordan controlled access and not Israel, which often imposes restrictions.

The dispute highlighted the tensions over the site which is sacred to both Muslims and Jews and has been a crucible of discord in the decades-old Israeli-Palestinian conflict.

Meanwhile the commemorations of the 20-year anniversary of the assassination of peace-seeking prime minister Yitzhak Rabin threw into stark relief the failure to resolve the conflict and divisions within Israel on how to do so.

Speaking at a special session of parliament Netanyahu said Rabin, who won the Nobel Peace Prize, "knew how to fight terrorism without making concessions and that is what we will do".

But opposition chief Yitzhak Hertzog slammed Netanyahu for policies that "have had no visible success in 10 years".

Rabin was gunned down on November 4, 1995 by a rightwing Jewish extremist who hoped to derail the landmark 1993 Oslo accords he inked with the Palestinians.

The deal lies in tatters after repeated failed efforts to solve the conflict, the most recent of which collapsed in April 2014 amid bitter recriminations.

The latest violence flared in September as Muslims protested an increase in Jewish visitors to Al-Aqsa, fuelling long-running fears Israel wanted to change the rules governing the compound allowing Jews to visit, but not to pray there.

This spiralled into a series of knife attacks and shootings by young Palestinians that has left eight Israelis dead since October 1.

In Hebron on Monday the army said one Palestinian man stabbed an Israeli soldier in the neck before being shot dead by soldiers, the army said.

Another Palestinian attacker, 19, allegedly tried to stab a soldier, and was shot dead.

Sporadic protests have also erupted in the occupied Palestinian territories, where youths often lob stones at Israeli police who respond with tear gas and gunfire.

Palestinian police and hospital sources said a 17-year-old was shot dead when clashes erupted near Hebron, but the cause of the protest was not given.

Monday's violence took the number of Palestinians killed in attempted attacks and clashes to 56. An Israeli Arab attacker has also been killed.