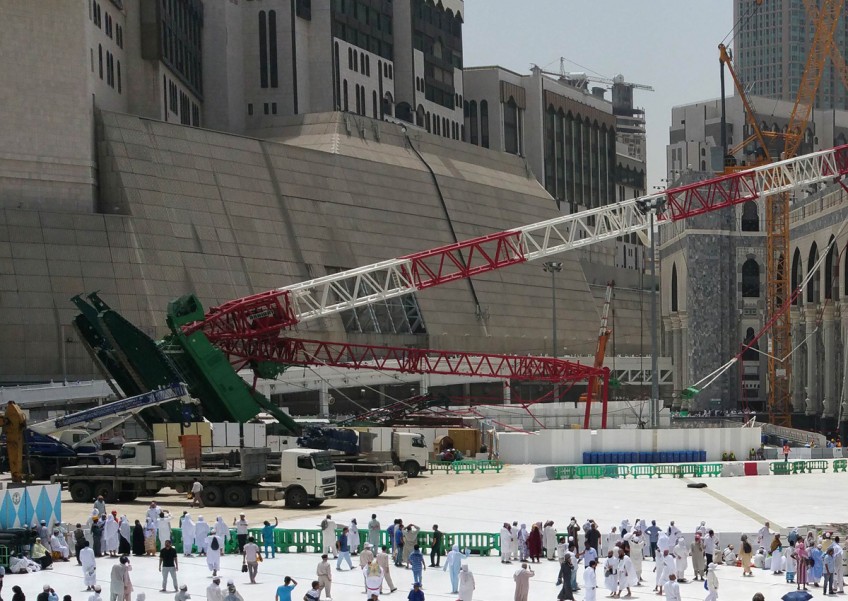 Pilgrims from around the world have begun massing in Saudi Arabia for the hajj, one of the biggest gatherings on the planet, undeterred by a crane collapse that killed 108 people at Islam's holiest site.

More than 1.2 million faithful have already arrived for the annual hajj, which begins on Tuesday against a backdrop of increased jihadi violence, a surge of the deadly MERS virus and with the kingdom at war in Yemen.

From all races and ages, they flocked into the Grand Mosque, where they prayed - some silently in tears and others loudly in groups carrying their countries' flags.

The hajj is among the five pillars of Islam and every capable Muslim must perform the pilgrimage at least once.

Previously marred by stampedes and fires that killed hundreds, it had been largely incident-free for the past decade after safety improvements.

But on September 11, during severe winds, a construction crane toppled into a courtyard of the Grand Mosque.

Saudis, Iranians, Nigerians, Malaysians, Indonesians and Indians were among the dead.

About 400 more people were injured, but it has not stopped pilgrims carrying out their rituals.

"Do you see the number of people here? Do you think they are fearful? It is quite the opposite. People here have faith in God and perceive those that died as martyrs," said Amin al-Rahman of Bangladesh.

The crane was one of several on a multi-billion-dollar expansion to accommodate increasing numbers of faithful.

With another million pilgrims expected for the hajj, King Salman acted swiftly to sanction the developer, Saudi Binladin Group.

Samira Abdulwahab, a pilgrim from Sudan who had just finished circling the cube-shaped Kaaba, which all Muslims face to pray, called the Grand Mosque "the safest place in the world".

The Kaaba is now barely visible amid the surrounding construction works.

Tawaf, or circumambulating the Kaaba, is a ritual of the pilgrimage performed by the white-clad pilgrims who come from all over the world.

They are following the 1,400-year-old tradition of Islam's Prophet Mohammed.

While the pilgrims will not notice it, they are arriving in a country at war.

Since March, the kingdom has led an Arab coalition conducting air strikes and supporting local forces in Yemen against Shiite Huthi rebels.

Hundreds of kilometres (miles) south of the Muslim holy cities of Mecca and Medina, at least 61 Saudi soldiers and civilians have been killed since March in shelling and skirmishes on the Saudi frontier with Yemen.

Tehran and Riyadh also support opposing sides in Syria's civil war, but political differences have not stopped Iran's pilgrims from arriving for hajj.

This year's pilgrimage coincides with a refugee crisis in Europe after millions of asylum seekers, most of them Muslim, fled wars in Syria, Iraq and Afghanistan.

The Islamic State group, which has carried out widespread atrocities and considers Shiites to be heretics, has seized swathes of Syria and Iraq.

IS has also killed dozens of people this year in bombings at Shiite mosques in Saudi Arabia, Yemen and Kuwait.

Ahmed Nour, a Syrian living in the port city of Jeddah, said there were worries about the threat from the Huthis as well as IS.

"But I think that authorities here are well-prepared", said Nour, who will undertake the pilgrimage this year.

"I think it's far more likely that IS would use hajj to recruit and spread their message," Hammond said.

The capital Riyadh saw a jump in infections last month.

But Health Minister Khaled al-Falih said all pilgrims are so far in "very good, if not excellent health." Saudi Arabia is the country worst affected by MERS, with 528 deaths since the virus appeared in 2012.

The health ministry has mobilised 25,000 additional medical staff to support the hajj, but says there has never been a case of MERS among pilgrims.

And despite the troubled backdrop, worshippers spoke of their elation at attending an event that marks the peak of their spiritual lives.

"We're praying for our kids," he said, holding his wife's hand and melting into the crowds.