Mexico City - Hopes of finding more survivors after Mexico City's devastating earthquake have dwindled to virtually nothing, nearly a week after the seismic jolt shook the mega-city, killing more than 300 people.

Yet authorities were still accommodating anguished families who insisted that painstaking rescue operations continue at a handful of the dozens of buildings toppled by the magnitude 7.1 quake that struck Tuesday.

Foreign teams from Israel, the US and elsewhere worked with dogs and hi-tech gear to try to detect signs of life under the rubble.

In the first three days, 69 people were pulled out alive. But since late Friday, only bodies have been recovered.

On a poster in front of a collapsed office block where several people were trapped by the quake, a picture of one of those inside read: "Adrian, you are a warrior. Your family, friends and Dario are waiting for you."

A series of smaller earthquakes in the south of Mexico on Saturday - including a 6.1-magnitude tremor that triggered seismic alerts - stoked panic in a population traumatized by Tuesday's disaster. Two women in the capital died of heart attacks.

The shaking also forced a brief suspension of rescue efforts.

The tremors underlined the historic vulnerability of the country to quakes, sitting as it does atop five tectonic plates.

A 1985 earthquake that killed 10,000 people in Mexico City is still fresh in the minds of locals so many years later.

But some of the families hoping against hope to see trapped loved ones again also clung to memories of "miracle" rescues in 1985 that happened more than a week after that quake.

Experts say that, usually, there is little to no chance of finding quake survivors after three days.

Read Also
At least 248 killed by earthquake in Mexico 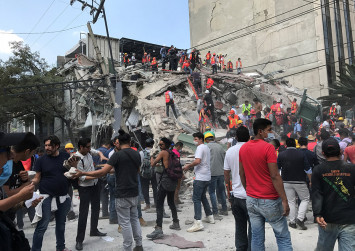 Yet Mexico City's mayor, Miguel Angel Mancera, insisted that around 30 people may still be found alive.

"I want to make absolutely clear that for the moment no building will be demolished and no type of heavy machinery will be used until we are fully certain" that all survivors and bodies are recovered, Navy Captain Sergio Suazo told reporters.

The smell of decaying bodies wafting from collapsed buildings presaged grief for some relatives.

Rescue workers wore face masks to shield themselves from the odour.

From the rubble of a flattened building in the south of the capital, emergency workers pulled out another body early Sunday. A thermal scanner on Saturday had suggested that two people might still be alive under the debris.

Survivors of another sort were found in the rubble of two crumpled buildings: a little white schnauzer dog and a squawking green parrot named Lucas.

Volunteer veterinarians were on hand at many search sites to give medical attention to saved pets, and to the sniffer dogs looking for survivors.

'Here to save lives'

The Mexican and foreign crews bent on rescuing survivors refused to call it quits.

"We're here to save lives. You have to have faith and believe (the people inside) are in a place with access to air and managed to survive," said Karin Kvitca, a 29-year-old with an Israeli rescue crew.

So far, the foreign specialists have found only cadavers. At one point, Japanese rescuers removed their helmets and bowed before a recovered corpse.

The Japanese team later ended their task and pulled out, after a small ceremony.

The latest death toll stands at 319, of which 181 of the fatalities were recorded in Mexico City.

The rest of the deaths occurred in the states of Morelos, Puebla, Mexico, Guerrero and Oaxaca.

In Mexico state, President Enrique Pena Nieto vowed there would be a rapid evaluation of the damage caused, and swift reconstruction of homes, schools and businesses.

An eight-year-old boy recovered alive was in an induced coma in hospital. He received videos rooting him on from his football heroes, including Dani Alves of Paris Saint-Germain and Arturo Vidal of Bayern Munich.