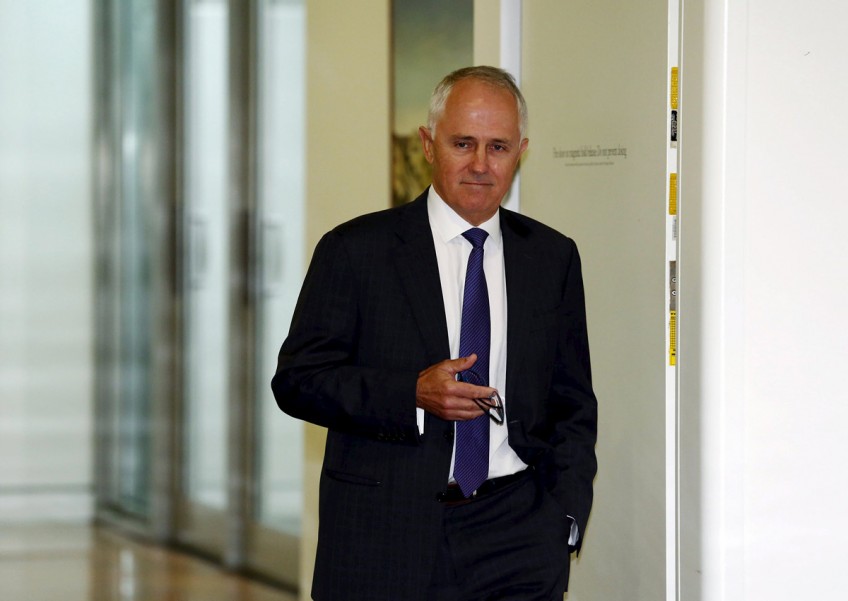 Turnbull, a 60-year-old millionaire former banker and businessman whose views are seen as moderate within the conservative Liberal Party, is expected to remove several key supporters of Abbott including Treasurer Joe Hockey.

Social Services Minister Scott Morrison is widely tipped to replace Hockey - despite voting for Abbott in the Monday night contest for the Liberal Party leadership that Turnbull won 54-44.

Turnbull has made economic policy a key tenet of his new administration, promising to speak honestly about the country's challenges as it transitions away from mining-led growth following an unprecedented resources investment boom.

Julie Bishop, who was re-elected as deputy party leader defeating Defence Minister Kevin Andrews 70-30, is understood to be retaining her foreign ministry portfolio.

Andrews, Employment Minister Eric Abetz and the Immigration Minister Peter Dutton - all Abbott supporters - might lose their jobs, according to local media.

But in a bid to keep the right wing of the party happy, Turnbull appeared set to retain other backers of the conservative former leader, including Environment Minister Greg Hunt, Trade Minister Andrew Robb and Assistant Treasurer Josh Frydenberg.

The new prime minister, also a former barrister, has already indicated he is keen to boost the number of women in his cabinet, in contrast to Abbott who was accused of holding sexist and outdated views.

There are two women currently serving in the cabinet - Bishop and Health Minister Sussan Ley - with Human Services Minister Marise Payne and Assistant Immigration Minister Michaelia Cash likely to be promoted in the reshuffle.

Abbott was also slammed for not having a separate science minister position in his cabinet, instead combining it with the industry ministry under Ian Macfarlane, but it is not known if Turnbull will reintroduce a standalone portfolio.

The announcement comes as Liberal candidate Andrew Hastie won a Western Australia by-election on Saturday, with some crediting the comfortable victory to Turnbull's ascension.

With more than 60 percent of ballots counted, the former special forces soldier was forecast to have secured the seat with a six percent swing against his party, compared to fears of a 10 percent move before Abbott was dumped.

Turnbull has also polled well nationally, with a Galaxy surveyed released Friday showed the government's standing higher at 51 percent compared to the opposition Labor's 49 percent, the first time it has been in a winning position since May 2014.