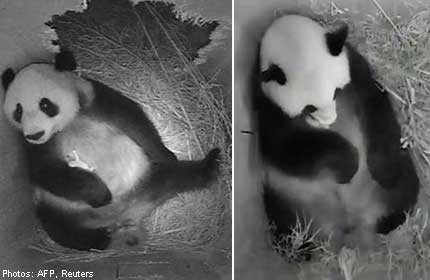 VIENNA, Austria - The Vienna zoo on Thursday made a birth announcement: Yang Yang and her mate Long Hui are the proud parents of another baby panda, the third one born of natural conception.

The newborn arrived at 12:24 Wednesday, his pink skin covered with a white down. He measures around 10 centimetres (four inches) and weighs about 100 grammes (3.5 ounces).

"No other European zoo has up to now succeeded in conceiving this animal species by natural means," the Schoenbrunn zoo said in a statement.

Other European zoos have relied on artificial insemination in efforts to propagate the endangered species. Female pandas have a very short period of fertility, just two or three days annually.

The new baby panda will remain isolated with his mother Yang Yang for several months, until the two decide themselves to leave their niche.

The zoo's director sent out a reminder of the fragility of a panda's first year of life.

"Even as we rejoice, we must remain realistic. The mortality rate for giant pandas in the first year is at 40 per cent, " said Dagmar Schratter in a statement.

The first panda born of natural conception at the Vienna zoo was in 2007 and Fu Long became a major attraction, drawing thousands of visitors. Three years later his brother Fu Hu arrived, adding to the panda mania.

The two pandas left the zoo at the age of two, adhering to the contract with the Chinese authorities. In the wild, young pandas leave their parents at that age.

China is the owner of all pandas born in captivity in zoos.

Fewer than 1,600 pandas remain in the wild, mainly in China's Sichuan province, with a further 300 in captivity around the world.

At the Schoenbrunn zoo, the 10-year loan of Yang Yang and Long Hui ended in March but negotiations to renew the loan are nearly complete, says Europe's oldest zoo, which is located in the park of the former imperial residence.