People visit at a memorial site for victims of Friday's shooting, in front of the Masjid Al Noor mosque in Christchurch, New Zealand March 18, 2019.

SYDNEY - The family of the Australian man arrested for the slaughter of 50 Muslim worshippers in New Zealand said on Sunday (March 17) that they were stunned and "shattered" by his horrific deed.

"It's just so much... to take in that somebody in our family could do anything like this," Ms Fitzgerald said from her home in New South Wales state.

Tarrant grew up in the small town of Grafton and showed no signs he would later become enthralled with white nationalist ideology while travelling in Europe and then turn that hatred into violence. 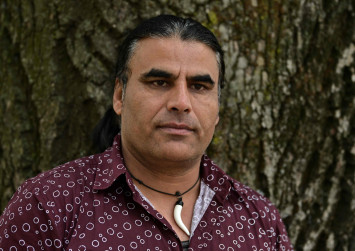 "It's only since he travelled overseas I think that the boy has changed, completely," she said, adding that as a teen, Tarrant was interested mainly in computer games.

He began travelling after his father died several years ago, and has been living in recent years in the southern New Zealand city of Dunedin.

But he returned home a year ago for the birthday of his sister, and Ms Fitzgerald said there were no signs he had undergone a transformation.

As Brenton Tarrant was charged in a Christchurch courtroom, many in his hometown of Grafton, Australia were stupefied.

"He was just his normal self," she said.

Tarrant's sister and mother, who still live in the area, have been placed under police guard and even family members can't contact them, she said.

"The police will do their duty and keep them protected, which is what they need, and no phone contact, they've said you can't contact them," she said.

Tarrant's uncle, Mr Terry Fitzgerald, said they learnt of his role in the massacre at two mosques in Christchurch from the television.