Next to exit: Globalisation? 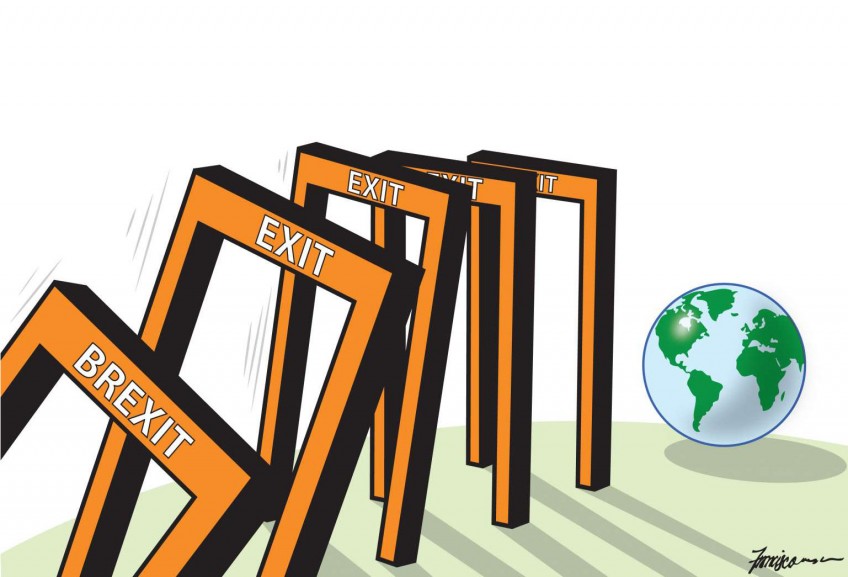 The surprising result of last week's British referendum, when a majority opted for Brexit - to leave the European Union (EU)- has sent shockwaves through financial markets around the world. As anti-integration movements pick up momentum in other EU member countries, the British referendum result, irrational though it may seem to many, will only serve to intensify these separation attempts.

On the other side of the Atlantic, the United States presidential election is also raising eyebrows across the world. Some potential presidential nominees, including Mr Donald Trump from the right and Senator Bernie Sanders from the left, who have used anti-globalisation platforms to run their campaigns, have garnered extensive support among the electorate. Whoever becomes the next president will not be able to ignore this sentiment among American voters and will have to make policy adjustments with regard to globalisation issues.

The current round of globalisation went into full swing during the heyday of the "Washington consensus" in the early 1990s after the collapse of the Soviet Union. People generally believed globalisation was good and more of it was better.

Such optimism had been the driving force for deep economic integration, not only in the goods and services market but also in capital and labour. Both cross-border capital flows and economic migration have been pushed to unprecedented levels.

Interestingly, while trade liberalisation was managed vigilantly, and safeguard measures were incorporated in the World Trade Organisation (WTO) agreements to mitigate possible negative effects, proponents of globalisation did not regard it necessary to introduce similar safeguards for business outsourcing and capital outflows.

Economists have been firm supporters of globalisation based on efficient market arguments. However, broader social and economic issues of globalisation - that involve deep integration of capital and labour as elements of production - have not been carefully studied and well understood.

Initially, the focus was on the benefits of globalisation: cheaper toys and shoes, more investment opportunities, production locations with lower labour and rental costs, and more job opportunities for skilled labour who were able to benefit from economic migration.

But gradually, adverse effects began to surface. These can be grouped into three areas - labour market conditions, capital mobility and income inequality.

An influx of immigrants makes the labour market more competitive and, at the same time, suppresses wages for domestic job seekers, especially in the unskilled and semi-skilled market segments.

It also presents enormous challenges regarding the social integration of immigrants.

In addition, business outsourcing led to the hollowing out of certain industries, producing a large number of unemployed who found it almost impossible to find a similar job. Both the unemployed and immigrants exert a huge burden on the social security system.

The second impact is associated with footloose capital. On the one hand, capital mobility upsets the balance of power between labour and management as firms can use relocation as a threat to gain the upper hand in collective bargaining.

On the other hand, capital mobility also gives multinational corporations more leeway. They can choose to evade tax in tax havens, or force governments to reduce corporate income tax rates and personal income tax rates using relocation as a threat. As a result, governments all over the world have been coerced into an unhealthy tax competition which drives down tax rates and reduces tax revenue.

However, people are mostly concerned with national, not global, inequalities. Globalisation generates a super-rich segment and squeezes the lower-middle classes in developed countries.

In addition, governments - facing continued reduction in tax revenue and increased social security spending - find it impossible to support the existing welfare system. Many countries have sought to reduce pensions and other welfare benefits, and postpone statutory retirement ages. All this has aggravated income inequality. Highly uneven distribution of income has also suppressed consumption, and dampened aggregate demand and economic growth in developed countries.

Globalisation creates new winners and losers across national boundaries, but cripples welfare systems that have been built for individual countries. Because there is no "world government" to mitigate the pressure from globalisation and redistribute income among countries for equality reasons, capitalism begins to exhibit some of the bad features associated with its primitive form, and globalisation is no longer viewed as favourably as before.

Apparently, the outcome of the referendum shows that British voters do not want to give up democracy and national sovereignty, and they do not believe the EU as a "supernational" organisation could help reduce the pain of globalisation. Instead, they chose to give up integration with the EU.

As more people in developed countries come to realise the adverse effects of globalisation, governments will also become less willing to propel it. While reversing economic integration is still considered impossible or highly unlikely, Brexit does give a strong reason to believe that the possibility of de-globalisation cannot be totally ruled out.

Already, "anti-dumping" has been frequently used as a non-tariff barrier ever since the global financial crisis in 2008; anti-immigration as mainstream public opinion has become more widespread; restrictions on capital mobility are also being introduced. The US government has started enforcing the Foreign Account Tax Compliance Act, the Organisation for Economic Cooperation and Development has stepped up its efforts to fight tax evasion and tax avoidance globally, and policies have been introduced in the US and other developed countries to attract manufacturing companies to shift production facilities back to their home countries.

De-globalisation, should it happen, is definitely bad news for Singapore, China, India and other emerging economies in Asia that have benefited greatly from the process. Their export markets would shrink if the reversal has a significant impact on international trade.

Brexit should not be viewed as a populist victory. Instead, the rationale behind seemingly irrational sentiments that are brewing in developed and developing countries should be studied carefully.

• The writer is a professor at the Lee Kuan Yew School of Public Policy, National University of Singapore.

This article was first published on July 01, 2016.
Get a copy of The Straits Times or go to straitstimes.com for more stories.