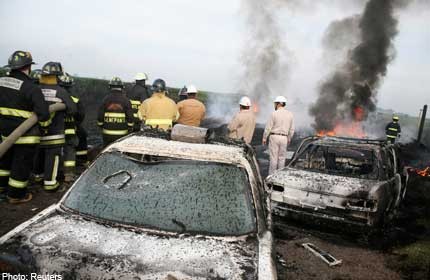 Rescue workers stand near two burnt police patrol vehicles at the scene of an explosion on a Pemex oil pipeline in Tonanitla, near Mexico City July 21, 2013.

Some 1,500 people were evacuated from surrounding towns following Tuesday's incident near the rural municipalities of Matias Romero and Barrio Soledad.

The pipeline broke when it was hit by a backhoe used by construction workers widening a road. The police and army have blocked the road.

It is the latest accident to hit Pemex, a state-owned monopoly that has suffered deadly blasts at several facilities and pipelines in recent years, including a gas leak explosion that killed 37 people at its Mexico City headquarters earlier this year.