North Korea says US has 'declared war', warns it could shoot down American bombers 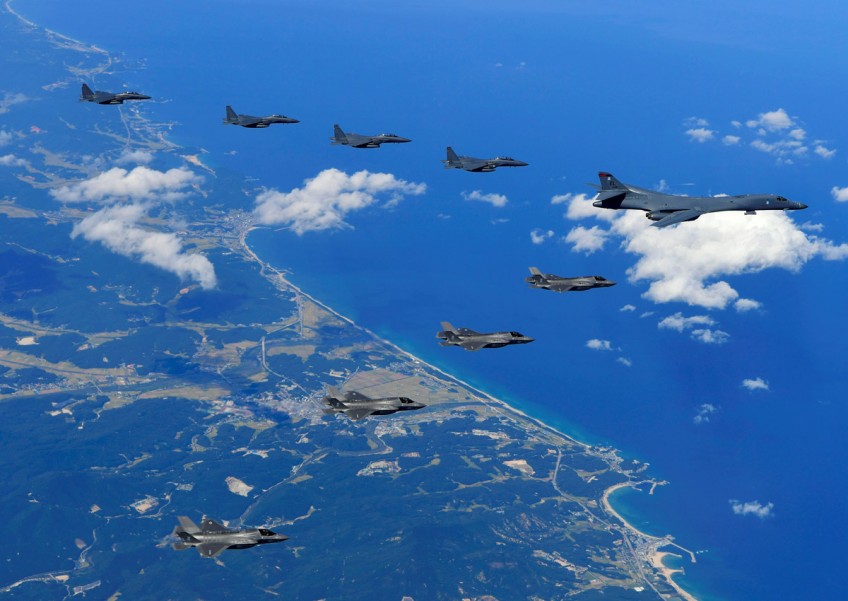 The US flew four stealth fighter jets and two bombers over the Korean peninsula in a show of force after North Korea's latest nuclear and missile tests, South Korea's defence ministry said.
Reuters

NEW YORK/SEOUL - North Korea's foreign minister said on Monday (Sept 25) that President Donald Trump had declared war on North Korea and that Pyongyang reserves the right to take countermeasures, including shooting down US bombers even if they are not in its air space.

The Pentagon later responded by saying that it would provide US President Donald Trump with options to deal with North Korea if such provocations continue.

Ri Yong Ho said a Twitter message by Trump on Saturday in which the president warned that the minister and North Korean leader Kim Jong Un "won't be around much longer" if they acted on their threats, amounted to a declaration of war.

"The whole world should clearly remember it was the US who first declared war on our country," Ri told reporters in New York.

"Since the United States declared war on our country, we will have every right to make countermeasures, including the right to shoot down United States strategic bombers even when they are not inside the airspace border of our country," he said.

"The whole world should clearly remember it was the US who first declared war on our country," Ri told reporters in New York.

"Since the United States declared war on our country, we will have every right to make countermeasures, including the right to shoot down United States strategic bombers even when they are not inside the airspace border of our country," he said.

On Saturday, US Air Force B-1B Lancer bombers escorted by fighters flew in international airspace over waters east of North Korea in a show of force after a heated exchange of rhetoric between Trump and Kim over North Korea's nuclear and missile programs.

The Pentagon said the flight was the farthest north of the demilitarised zone separating North and South Korea that any US fighter jet or bomber has flown in the 21st century. "That operation was conducted in international airspace, over international waters, so we have the right to fly, sail and operate where legally permissible around the globe," Pentagon spokesman Colonel Robert Manning said on Monday.

North Korea, which has remained technically at war with the United States since the 1950-53 Korean War ended in a truce not a peace treaty, has been working to develop nuclear-tipped missiles capable of hitting the US mainland and conducted its sixth and largest nuclear test this month.

Pyongyang accuses the United States, which has 28,500 troops in South Korea, of planning to invade and regularly threatens to destroy it and its Asian allies.

However, the recent spike in rhetoric from both sides has fuelled tensions and raised fears of miscalculation by one side or the other that could have massive repercussions.

US Treasury yields fell to session lows after Ri's comments on Monday.

The Pentagon said the bomber flight indicated the range of military options available to Trump, but US officials have repeatedly stressed that despite the war or words, the administration prefers a negotiated solution to the crisis.

Pentagon spokesman Manning responded to Ri's warning about shooting down US bombers by saying: He added: "If North Korea does not stop their provocative actions, you know, we will make sure that we provide options to the President to deal with North Korea."

The latest round of heavy verbal salvoes began when Trump threatened in his maiden UN address last Tuesday (Sept 19 to "totally destroy" North Korea, a country of 26 million people, if it threatened the United States or its allies.

In an unprecedented direct statement on Friday, Kim responded by calling Trump a "mentally deranged US dotard"whom he would tame with fire.

Kim said North Korea would consider the "highest level of hard-line countermeasure in history" against the United States and that Trump's comments had confirmed his nuclear programme was "the correct path".

Ri told the UN General Assembly on Saturday that targeting the US mainland with its rockets was inevitable after "Mr Evil President" Trump called Kim a "rocket man" on a suicide mission.

On Twitter late on Saturday, Trump replied: "Just heard Foreign Minister of North Korea speak at UN If he echoes thoughts of Little Rocket Man, they won't be around much longer!" On Monday, North Korea, which has pursued its missile and nuclear programs in defiance of international sanctions, said it"bitterly condemned the reckless remarks" of Trump.

United Nations Secretary-General Antonio Guterres said on Monday that the only solution to the crisis was a political one. "Fiery talk can lead to fatal misunderstandings," UN spokesman Stephane Dujarric told reporters.

China, North Korea's neighbour and main ally, which has nevertheless backed UN sanctions over Pyongyang's nuclear programme, called on Monday for all sides in the crisis to show restraint and not "add oil to the flames".

China's Foreign Ministry spokesman Lu Kang described the situation as highly complex and sensitive. He said it was vitally important everyone strictly, fully and correctly implemented all North Korea related UN resolutions, which call for both tighter sanctions, and efforts to resume dialogue.

All sides should "not further irritate each other and add oil to the flames of the tense situation on the peninsula at present", Lu told a daily news briefing.

Speaking to British Prime Minister Theresa May by telephone, Chinese President Xi Jinping repeated Beijing's position that the North Korean issue should be resolved peacefully via talks and hoped Britain could play a constructive role in pushing for this, Chinese state media said.

Downing Street said the two leaders agreed there was a particular responsibility for China and Britain, as permanent Security Council members, to help find a diplomatic solution.

Ri warned said on Friday North Korea might test a hydrogen bomb over the Pacific Ocean, in what would be North Korea's first atmospheric nuclear test. Experts said such a move, while perhaps not imminent, would be proof of North Korea's ability to successfully deliver a nuclear warhead on a missile.

On Monday, Japanese Prime Minister Shinzo Abe, a staunch US ally, said he would dissolve parliament's lower house on Thursday for a snap election, seeking a mandate to stick to his tough stance towards a volatile North Korea and rebalance the social security system.