Not enough pork in 'whole world' to fill China gap

Financial services firm Rabobank estimates that China could lose up to 200 million pigs to disease or slaughter during the epidemic, almost three times the pig population in the United States.

There is not enough pork in "the whole world combined" to fill the potential supply shortfall that will hit China later this year, market analysts have warned.

Pork exporting countries around the world are scrambling to fill the supply gap in China as an African swine fever epidemic sweeps across the country.

Financial services firm Rabobank estimates that China could lose up to 200 million pigs to disease or slaughter during the epidemic, almost three times the pig population in the United States.

China is the world's biggest pork producer, with roughly 433 million pigs, according to the US Department of Agriculture (USDA). And the loss of half of the country's pigs could push prices up by as much as a 70 per cent, a Chinese agriculture ministry official said last week.

Read Also
Up to 200m pigs could be culled or die from swine fever in China: Rabobank 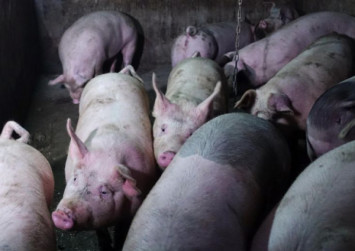 Rabobank senior analyst Chenjun Pan said pork production would fall in China this year and next.

"A lot of herd will disappear due to infection and liquidation," Pan said. "There will be a great shortage. We don't think any country in the world - or the whole world combined - could cover this supply gap. Even after increasing the imports, there remains a supply shortage."

China is estimated to have about 200,000 tonnes of pork in its reserves, but this is just a fraction of the supply needed to satisfy demand in the world's biggest pork market. That shortfall is reflected in the number of Chinese buyers turning to the United States for pork, despite heavy trade war duties.

Before the trade war began, US pork exports to China were subject to 12 per cent import duties. Two tranches of tariffs worth 25 per cent each saw that rocket to 62 per cent. Yet, despite the huge added cost, China buyers started putting orders for US pork products again in March in anticipation of the shortage and in the hope that by the time the shipments were made, the tariffs would have been relaxed as part of a trade deal.

In the week ending March 7, China bought 23,846 tonnes of US pork, about eight times the amount purchased a week earlier, according to the USDA. But analysts said this was probably a speculative purchase and unlikely to have been shipped yet.

"Actual shipments are not that common at the moment," Pan said. "What we are seeing is Chinese companies making an offer and trying to hold the shipment for later."

Angela Zhang, head of the business intelligence division at Shanghai-based IQC Insights, said China's pork imports were down from the US this year.

"According to the latest data from China Customs, in spite of the tariffs imposed last year, China still imported 10,917 tonnes of pig meat and 12,212 tonnes of pork offal [from the US] in the first two months of 2019. However, compared to the same period of last year, the import volumes have decreased by 30.8 per cent and 65.1 per cent respectively," Zhang said.

Canada was one of the major suppliers last year, the third highest behind Germany and Spain, and accounting for 13.4 per cent of China's pork imports in 2018.

Martin Lavoie, president of Canada Pork International, an export promotion agency in Ottawa, said those exports had increased in the last few months.

"That is probably the case for every country that exports to China," Lavoie said.

He said that after the US, China was the biggest export market for Canadian pork.

He added that the industry had not been subjected to any of the trade barriers encountered by Canadian canola companies, such as bars on exports to China over pests allegedly found in shipments. Industry players say the grain bans are in response to Canada's detention of Huawei executive Meng Wanzhou.

"It is business as usual for us - our exports have had no disruption," Lavoie said.

Other agricultural markets are also bracing for impact from the swine fever outbreak, including the soybean trade, which supplies vast quantities to feed livestock in China.

"This would be the first marketing-year decrease for Chinese soybean imports since the 2003-04 marketing year. A complete understanding of the ultimate impact of African swine fever on Chinese protein needs won't be known until the disease is controlled," Hatchett said.