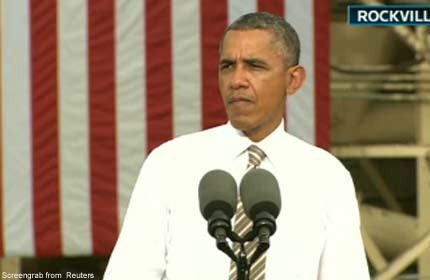 WASHINGTON - President Barack Obama scrapped trips to two key Asian summits on Thursday, blaming the US government shutdown for the cancelation of a tour designed to advance a central prong of his foreign policy.

After days of speculation that the trip was in jeopardy following the shutdown crisis, a White House statement late Thursday confirmed Obama would miss the Asia Pacific Economic Cooperation (APEC) summit in Bali and the East Asia summit in Brunei next week.

The president had already cancelled plans to visit Malaysia and the Philippines, but had delayed taking a decision on the summit meetings, both seen as an opportunity to push important foreign policy initiatives in the region.

"Due to the government shutdown, President Obama's travel to Indonesia and Brunei has been cancelled," the White House statement said.

"The President made this decision based on the difficulty in moving forward with foreign travel in the face of a shutdown, and his determination to continue pressing his case that Republicans should immediately allow a vote to reopen the government."

The White House said Obama had called Indonesia President Susilo Bambang Yudhoyono to inform him of the cancelation.

"He expressed his regret that the ongoing government shutdown in the United States will prevent him from attending the Summit," the statement said.

Obama had also called the Sultan of Brunei, the White House said.

Secretary of State John Kerry would lead the US delegations to both countries in place of Obama, the statement said, before rounding on Republicans for causing a "completely avoidable shutdown."

"The cancelation of this trip is another consequence of the House Republicans forcing a shutdown of the government," the White House statement said.

"This completely avoidable shutdown is setting back our ability to create jobs through promotion of US exports and advance US leadership and interests in the largest emerging region in the world."

The budget impasse which has shuttered swathes of government departments and sent hundreds of thousands of federal workers home had left Obama torn between his political priorities at home and important foreign policy goals.

White House spokesman Jay Carney had already hinted that the trip to Asia was at risk if the government shutdown was not resolved by the time of Obama's scheduled departure on Saturday.

Political analysts had questioned whether Obama would risk traveling abroad and present an opening to domestic foes while on the other side of the globe.

Republicans would almost certainly accuse the president of placing more importance on striding the world stage while neglecting his duties at home.

However analysts had warned a no-show by Obama could hurt US interests in Asia, allowing competitors in the region such as China to make the case that Washington is an unreliable partner.

"I think there's a lot at stake here with this trip," said Ernie Bower, a Southeast Asia specialist at the Center for Strategic and International Studies before the cancelation was made official.

"The geopolitical ramifications of the president not making a trip if he decides indeed that he has to cancel... - it would leave a big geopolitical mark."

Bower said US allies would also question the extent of Obama's commitment to Asia.