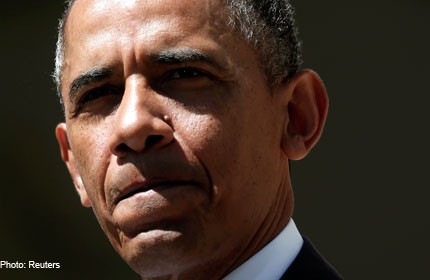 WASHINGTON - The United States again faces the unpalatable policy dilemma that has shaped decades of relations with Egypt.

Should it swallow its values on human rights and democracy and sup with Egyptian generals who plotted a coup but are vital to US strategic and security interests?

The White House has struggled for two years to keep pace with Arab revolutions.

But the ouster of democratically-elected president Mohamed Morsi and a bloody crackdown on Islamist protesters have revived uncomfortable questions which dogged the alliance with strongman Hosni Mubarak.

For years, Washington bought a cold peace between Israel and Egypt, priority access to the Suez Canal, a partner in Middle East peace brokering and checked the spread of Islamic extremism with billions of dollars in mostly military aid.

Now, President Barack Obama must decide whether to renew that pragmatic bargain with a government again accused of crushing bedrock freedoms. "This is a balancing act between how to best promote our interests and our values and our principles," said Marie Harf, a State Department spokeswoman.

With rare candor, the White House will not call Morsi's ouster a coup - to avoid being forced to cut aid to Egypt under US law.

But with protesters gunned down in the streets, some question whether US credibility on human rights is undercut by a relationship with Egypt's junta.

"We can no longer conduct business as usual," said Democratic Senator Tim Kaine, an Obama ally, calling for a halt to aid to Egypt pending a return to democracy and political freedoms.

The tussle between US values and national security priorities is not confined to Egypt - it has been a theme in US foreign policy since the 1970s.

"There has always been this tension. It has generally been decided in favor of short term national interests, strategic interests and not human rights and democratic issues," said Gregory Gause, a political science professor at the University of Vermont.

As guarantor of the 1978 Camp David peace accords between Israel and Egypt, Washington has fed Egyptian generals top US hardware, including battle tanks, F-16 warplanes and helicopters.

Since 1987, the annual price tag has been $1.3 billion plus several hundred million in economic and development help. Only Israel enjoys more US largesse.

But Obama said last week "our traditional cooperation cannot continue as usual when civilians are being killed in the streets."

He called for an end to martial law and support for universal rights while cancelling a planned military exercise with Egypt.

He did not however turn off military aid, though will assess the price and return of US assistance and US capacity to influence events in Cairo, in a policy review.

The remaining nearly $600 million of military aid due this year remains pending. Officials however privately say an order of 10 Apache attack helicopters to Cairo could be held off.

A fight meanwhile is brewing on Capitol Hill over next year's package. Obama's moral exposure on Egypt may be more acute than that of previous presidents.

A Nobel laureate, he argues that long-term, democratic transitions in the Arab world are vital to US security.

And after calling for a "new beginning" with the Islamic world in Cairo in 2009, cozying up to the generals slaughtering the Muslim Brotherhood would spark hypocrisy charges.

American guilt over the pact with Egypt has surfaced periodically.

In 2005, George W. Bush sent his secretary of state Condoleezza Rice to Cairo with a startling message.

"For 60 years, my country, the United States, pursued stability at the expense of democracy in this region, here in the Middle East - and we achieved neither," Rice said.

But US aid still flowed and Mubarak kept his seat at the Middle East peacemaking table.

Obama also bought into the bargain, praising Mubarak in the Oval Office in 2009 as a "leader and counselor and friend," though the State Department said Egypt was stained by torture, abuse and arbitrary arrests.

Apparently without noticing the irony, Obama drove the same year through Cairo streets cleared by Mubarak's iron-fisted security forces, and then made a case for Arab political freedom in a seminal speech.

Critics of the US pact with Cairo's generals argue it fomented anti-Americanism and bred extremism.

So, as officials admit that US influence in Cairo is not what it was, what will Obama do?

Previous form suggests he will plot a middle course after what an official told AFP would be the most comprehensive rethink of US policy towards Egypt in years.

One option might be to reorient military aid to equipment suitable to fighting jihadism in the Sinai peninsula.

Washington will "go as far as it can without putting into danger the fundamentals of the strategic relationship with Egypt: the peace treaty with Israel ... preferential shipping treatment in the canal, military cooperation, intelligence cooperation," Ibish said.