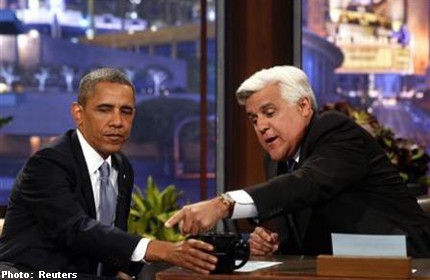 US President Barack Obama sits next to Jay Leno during the taping of "The Tonight Show with Jay Leno" comedy show at the NBC Studios in Burbank, California in 2013.

CALIFORNIA - US President Barack Obama confirmed on Tuesday that he would go to Russia this fall for a G20 summit but expressed disappointment that Russia had granted temporary asylum to former US spy agency contractor Edward Snowden.

He did not mention whether he would attend a separate meeting with Russian President Vladimir Putin, a meeting put in question after Moscow rejected US pleas and granted Snowden a year's asylum. The White House has said it is evaluating whether that one-on-one meeting makes sense.

"There have been times where they slip back into Cold War thinking and a Cold War mentality," Obama said of Russia.

"What I say to President Putin is, that's the past and ... we've got to think about the future. And there's no reason why we shouldn't be able to cooperate more effectively than we do."

During the interview, Obama also said the recent threat that caused the United States to close embassies throughout the Middle East was significant.

"It's a reminder that for all the progress we've made ... this radical, violent extremism is still out there," Obama said. "We've got to stay on top of it."

The US State Department issued a worldwide travel alert on Friday warning Americans that al Qaeda may be planning attacks in August, particularly in the Middle East and North Africa. It initially announced the US embassy closures would be only for the day on Sunday, then extended the closures of some by a week.

In lighter notes, Obama said he had invited former Secretary of State Hillary Clinton to her recent lunch at the White House and described her as having a post-administration "glow."

He also confirmed - more or less - a budding "bromance" with his former 2008 presidential rival, Republican Senator John McCain. McCain has been supportive of Obama's push to reform US immigration laws.