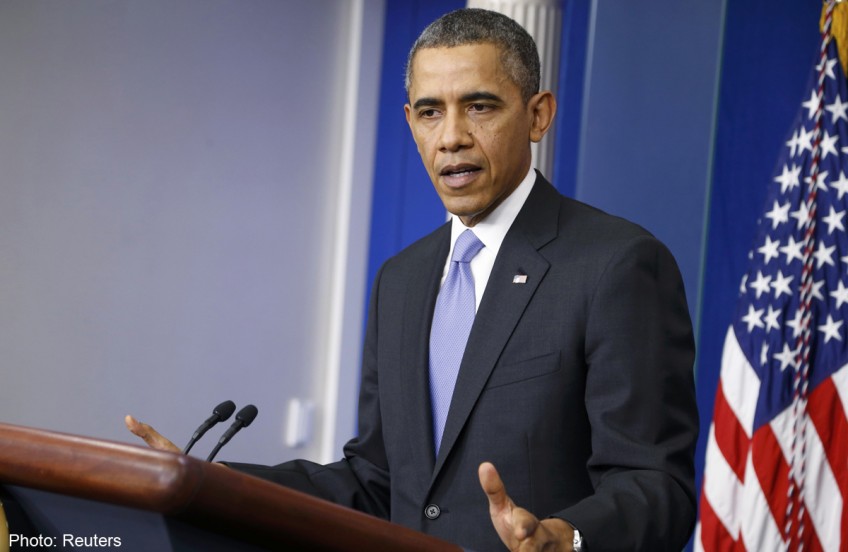 WASHINGTON - President Barack Obama invited German Chancellor Angela Merkel to Washington on Wednesday, hoping to mend fences after a row provoked by revelations of US eavesdropping on her cellphone.

Obama called Merkel to wish her a speedy recovery after her recent skiing injury and invited her to visit at a "mutually agreeable time in the coming months," the White House said in a statement.

Merkel reacted furiously last year to revelations that the National Security Agency had been listening in on her mobile, telling Obama in October that this would be a "breach of trust" between two allies.

Media reports of American snooping based on documents leaked by fugitive intelligence contractor Edward Snowden have damaged US relations with key allies and were a political and personal embarrassment for Obama.

Washington never confirmed that the eavesdropping had taken place, but implicitly gave credence to the reports by the careful formulation of its response to questions from reporters.

The White House said that US spies were not currently monitoring Merkel's phone and would not do so in the future, but would not comment on past surveillance activity.

The invitation to Merkel comes as the White House tries to draw a line under the Snowden issue, with Obama poised to give a speech to Americans this month detailing how the NSA's massive phone and data collection activities will be reformed.

Ostensibly, Obama called Merkel, with whom he had a close relationship prior to the Snowden revelations, to check on her health after she fractured her pelvis while skiing.

"The president spoke to Chancellor Merkel today to wish her a speedy recovery following her injury and to congratulate her on the formation of her new cabinet," the statement said.

"The leaders noted the full agenda for 2014, including the Transatlantic Trade and Investment Partnership (T-TIP) negotiations and NATO Summit, and looked forward to working closely together to advance our shared interests."

The White House would not say whether Obama and Merkel had discussed the NSA phone tapping allegations in their telephone call.

One reporter raised a laugh among his peers in the White House briefing room, however, when he asked whether the call had taken place on a mobile phone or a fixed landline.

Merkel's office confirmed in a statement that she would accept Obama's invitation to visit the United States, but like the White House, did not offer a date.

The discomfort between Obama and Merkel over the NSA allegations is all the more notable because he has privately confided she is one of the foreign leaders whom he most respects.

The president honoured Merkel with a White House state dinner in 2011 and she repaid his hospitality by welcoming to Berlin for a long awaited visit last year, which included an evocative speech by the US leader before the Brandenburg Gate.

The NSA allegations were especially sensitive in Germany due to sensitivity over mass state spying on citizens by the Stasi secret police in the former communist East.

They were also a political embarrassment for Merkel, and she demanded answers over what she said were "grave" allegations which tested transatlantic ties ahead of crucial trade talks.

"They must be explained and, more important still for the future, new trust must be built," she told the German parliament.

Some observers and politicians in Washington however accused the German leader of naivety in thinking that US, and other security services were not interested in intercepting her communications.

After the evidence surfaced about Merkel's phone, German spy chiefs headed to Washington for talks with US officials.

Washington's relations with other allies and governments have also been hampered by the NSA reports, including with leaders of Brazil and Mexico, and there has been widespread disquiet in Europe over the scope of NSA data mining and phone data sweeps.