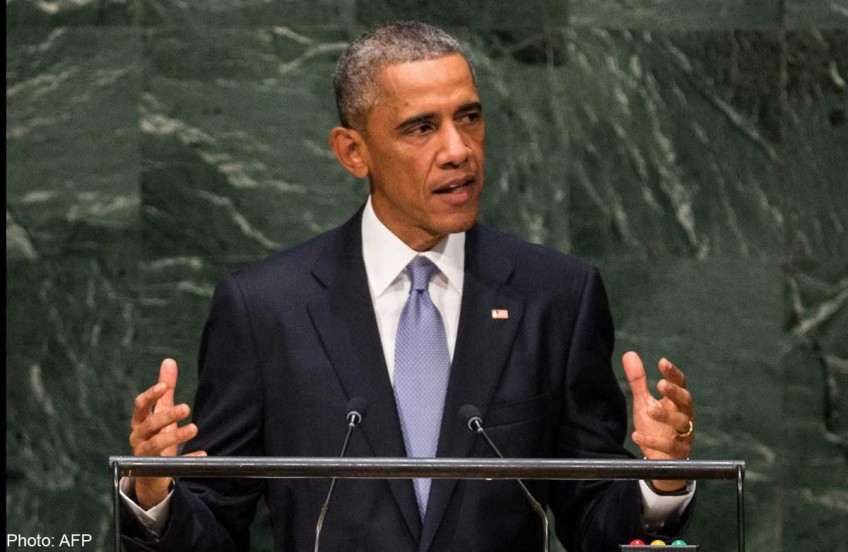 UNITED NATIONS, United States - US President Barack Obama on Wednesday slammed Russia's "aggression" in Ukraine but offered to lift sanctions against Moscow if it threw its weight behind an unraveling peace deal with Kiev.

The outstretched hand to Moscow came a day after pro-Russian guerrillas brushed off Ukrainian President Petro Poroshenko's limited self-rule offer and announced plans to set up their own parliaments in self-organised November 2 polls.

The autonomy plan was at the heart of the pro-Western leader's attempts to quell a revolt that has devastated the ex-Soviet nation's economy and revived a Cold War-era mistrust between Moscow and the West.

A tough-talking Obama told a special UN General Assembly session in New York that Russia was on the wrong side of history in Ukraine. But he also stressed that a ceasefire deal agreed earlier this month offered an opening toward diplomacy and peace.

"We will impose a cost on Russia for aggression." But if Moscow "changes course", he said, "we will lift our sanctions and welcome Russia's role in addressing common challenges".

"The sanctions are the United States' own business," Interfax quoted Lavrov as telling Russian reporters.

"But the things happening in Ukraine are not their business at all." Hours later, Yatsenyuk urged the West to maintain sanctions on Russia in his address to the General Assembly.

"We ask our partners not to lift sanctions until Ukraine takes control of its entire territory," said Yatsenyuk, who is due to meet UN chief Ban Ki-moon on Thursday.

The Ukrainian premier also blasted Russia in his speech, deriding it as the "insecurity member" of the Security Council and denouncing a Russian "invasion" of Ukraine.

Poroshenko himself has issued no comment since seeing his high-stakes bid to resolve a crisis that has killed more than 3,200 people so openly challenged just days after it was unveiled.

Ukraine's parliament had last week backed his plan for rebel-held parts of the Russian-speaking east to hold local council elections December 7 that would help restore law and order but not pursue any independence claims.

But the Kremlin appeared ready to ratchet up tensions further by focusing state media on claims of the bodies of four tortured civilians being discovered in an eastern coal mine that had allegedly served as a Ukrainian military base.

The Russian foreign minister said starkly that "most likely, we are looking at war crimes that can never be justified." Both the press office of Ukraine's eastern campaign and the National Guard - a part-volunteer force Moscow frequently brands as "fascists" - denied ever having control of the Donetsk industrial region mine.

And a team of monitors from the OSCE pan-European security body reported after a visit to the site Wednesday that it had seen four corpses "in the process of decomposition." The monitors stressed that they could not "provide a forensic assessment of the sites."

Both Kiev and its Western allies fear Putin is trying to turn the east of Ukraine into a "frozen conflict" similar to those that have already given Moscow effective control over parts of the ex-Soviet nations Georgia and Moldova.

The string of recent peace overtures have helped calm the deadliest fighting and allowed some of the 650,000 people driven out of their homes by the conflict to start rebuilding their lives.

Both sides have also begun pulling back their biggest guns and tanks from the front line in order to establish a 30-kilometre (19-mile) buffer zone that could be overseen by monitors from the OSCE pan-European security group.

The Kremlin has welcomed the withdrawal as a sign of Poroshenko admitting he did not need a war fought "until there are no more Ukrainians left standing." Eurasia Group political risk consultancy said the current peace deal "yields Moscow an acceptable level of control over Ukraine and avoids further sanctions." "While the near term will bring some fragile calm, the fundamental clashes that underpin this entire crisis cannot stay hidden for long," it warned.