Obama warns Russia in tense call with Putin over Ukraine 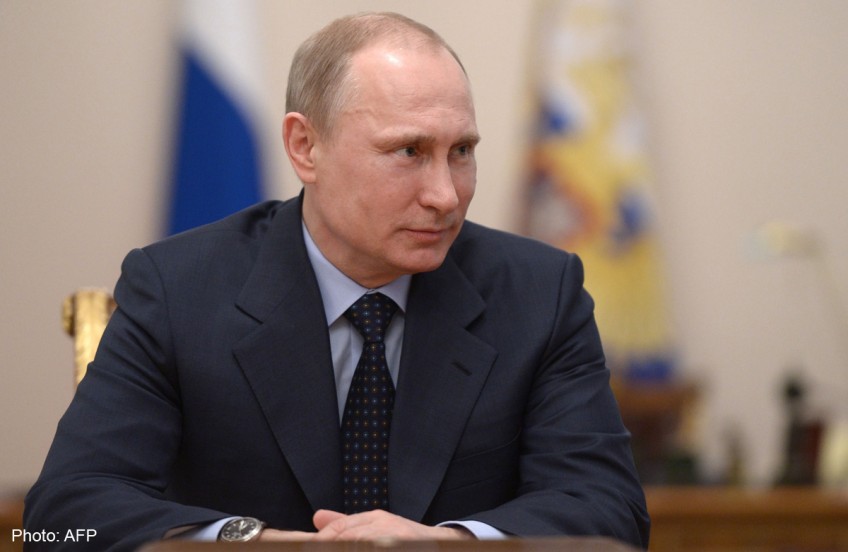 WASHINGTON - US President Barack Obama told Russian President Vladimir Putin in a tense phone call on Monday that Moscow would face further costs for its actions in Ukraine and should use its influence to get separatists in the country to stand down.

Armed pro-Russian separatists seized more buildings in eastern Ukraine earlier in the day, expanding their control after the government failed to follow through on a threatened military crackdown.

In a call that the White House said Moscow requested, Obama told Putin that those forces were threatening to undermine and destabilize the government in Kiev.

"The president emphasised that all irregular forces in the country need to lay down their arms, and he urged President Putin to use his influence with these armed, pro-Russian groups to convince them to depart the buildings they have seized," the White House said in a statement.

Obama said Russian troops needed to withdraw from Ukraine's border to defuse tensions and made a point of praising Kiev for its "remarkable restraint" and efforts to unify the country with elections, constitutional reform and proposals to decentralize power to local governments.

"The president noted Russia's growing political and economic isolation as a result of its actions in Ukraine and made clear that the costs Russia already has incurred will increase if those actions persist," the White House said.

"(He) said that while he continues to believe that a diplomatic solution is still possible, it cannot succeed in an environment of Russian military intimidation on Ukraine's borders, armed provocation within Ukraine, and escalatory rhetoric by Kremlin officials."

The Kremlin said Putin told Obama during the call that Russia was not interfering in Ukraine and urged Washington to use its influence to prevent bloodshed.

Earlier, US officials stopped short of announcing a new set of sanctions against Russia but said they were in consultations with European partners about the prospect.

The European Union agreed on Monday to step up sanctions against Moscow by expanding a list of people subjected to asset freezes and visa bans.

A senior administration official described the call between Obama and Putin as "frank and direct," a diplomatic construction that usually means tense.

The next round of US sanctions, which would be the fourth imposed since the Ukraine crisis began, is likely to target Russians close to Putin as well as Russian entities, three sources familiar with the discussions said on Sunday.

US State Department spokeswoman Jen Psaki noted that the United States was prepared to impose sanctions on individuals and entities in the financial services, energy, metals, mining, engineering and defence sectors.

The sanctions have been the most visible sign of US anger at Russia's annexation of the Crimea region in southern Ukraine last month, reflecting the deepest plunge in US-Russian relations since the Cold War.

US officials declined to identify a timeline on Monday for further sanctions. "I can assure you that Russia's provocations - further transgressions and provocations will come with a cost. And I'm not here to specify what cost will come from which specific action, but there have already been costs imposed on Russia; there will be further costs imposed on Russia," White House spokesman Jay Carney told reporters.

Obama spoke to French President Francois Hollande about the crisis on Monday and, as he did later with Putin, praised Ukraine's government for showing restraint, a sign Washington hopes Kiev will hold that course.

Carney also confirmed that the director of the US Central Intelligence Agency, John Brennan, had been in Kiev over the weekend and decried what he called "false claims" leveled at the CIA by Russian authorities. "US and Russian intelligence officials have met over the years. To imply that US officials meeting with their counterparts (in Kiev) is anything other than in the same spirit is absurd," he said.

According to media reports, Russia had urged Washington to explain what Brennan was doing in Ukraine.