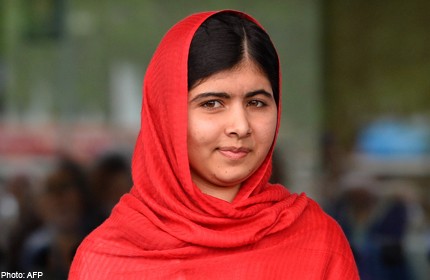 MIRANSHAH, Pakistan - The Pakistani Taleban said Friday they were "delighted" that Malala Yousafzai, the teenage activist they tried to kill, missed out on the Nobel Peace Prize.

The Tehreek-e-Taliban Pakistan (TTP) shot Malala in the head on her school bus on October 9 last year for speaking out against them. After the shooting she was flown to Britain for specialist care and made a remarkable recovery, going on to become a global ambassador for children's rights.

Spokesman Shahidullah Shahid told AFP the 16-year-old had done nothing to deserve the Nobel, which went to the Organisation for the Prohibition of Chemical Weapons (OPCW) for its work to rid the world of chemical arms.

"This award should be given to the real Muslims who are struggling for Islam. Malala is against Islam, she is secular."