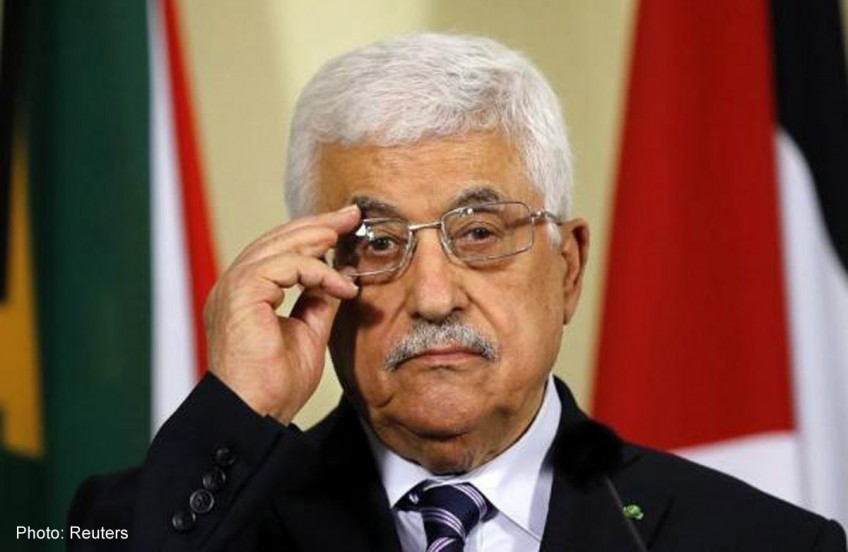 Palestinian President Mahmoud Abbas listens to a question during a media briefing at the Union Building in Pretoria November 26, 2014.

RAMALLAH, West Bank - Palestinian President Mahmoud Abbas signed on to 20 international agreements on Wednesday, including the Rome Statute of the International Criminal Court (ICC), a day after a bid for independence by 2017 failed at the United Nations Security Council.

The move, which angered Israel and the United States, paves the way for the court to take jurisdiction over crimes committed in Palestinian lands and investigate the conduct of Israeli and Palestinian leaders over more than a decade of bloody conflict.

"They attack us and our land every day, to whom are we to complain? The Security Council let us down - where are we to go?" Abbas told a gathering of Palestinian leaders in remarks broadcast on official television.

The Palestinian UN observer mission initially announced it would deliver on Wednesday to the United Nations the signed documents to accede to the Rome Statute, the treaty that established the ICC. But the mission later said the delivery had been postponed and would likely take place on Friday.

According to the Rome Statute, the Palestinians would become a party to the court on the first day of the month that follows a 60-day waiting period after depositing signed and ratified documents of accession with the United Nations in New York.

In the months leading up to Tuesday's failed UN bid, Sweden recognised Palestinian statehood and the parliaments of France, Britain and Ireland passed non-binding motions urging their governments to do the same.

Israeli Prime Minister Benjamin Netanyahu said Abbas's action would expose the Palestinians to prosecution over support for what he called the terrorist Hamas Islamist group, and vowed to take steps to rebuff any potential moves against Israel.

Israel and Hamas fought a July-August war in which more than 2,100 Palestinians, 67 Israeli soldiers and six civilians in Israel were killed.

"We will take steps in response and defend Israel's soldiers," Netanyahu said in a statement.

The United States said the was of deep concern and unhelpful to peace efforts in the region.

"It is an escalatory step that will not achieve any of the outcomes most Palestinians have long hoped to see for their people," State Department spokesman Jeff Rathke said in a statement. "Actions like this are not the answer."

Palestinians seek a state in Gaza, the West Bank and East Jerusalem - lands Israel captured in the 1967 Middle East War.

Momentum to recognise a Palestine has built up since Abbas succeeded in a bid for de facto recognition of Palestinian statehood at the UN General Assembly in 2012, which made Palestinians eligible to join the ICC.

Palestinian officials said on Tuesday American opposition made inevitable the defeat of a Security Council resolution calling for the establishment of a Palestinian state by late 2017 after no more than a year of peace negotiations.

The United States and Australia voted against the bid, while eight countries voted yes and five abstained. The Palestinians were unable to achieve a hoped-for nine votes which would have forced the US to exercise its veto as one of the council's five permanent members.

Peace talks mediated by the United States collapsed in April in a dispute over Israeli settlement-building and a prisoner release deal, as well as Abbas's decision to sign on to over a dozen previous international texts Israel saw as a unilateral move the contravened the negotiations.

She added that there were no immediate plans to lodge a formal complaint at the ICC, but that Abbas's move is "a clear signal to Israel and the international community that Israel must cease and desist its war crimes, especially settlements."

Other agreements approved by Abbas included several articles on the court's jurisdiction, commitments against banned weapons and cluster munitions along with less controversial pledges on the political rights of women, navigation and the environment.