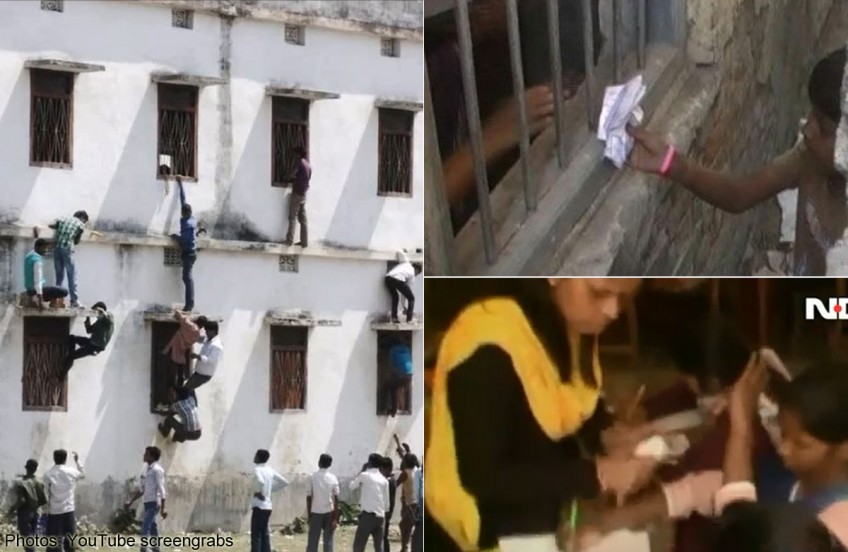 The relatives were attempting to pass notes to candidates in an exam.

PATNA - Images of Indian students blatantly cheating on school-leaving examinations under the noses of supervisors have gone viral, inviting ridicule on Twitter and exposing flaws in the much-maligned education system of an impoverished eastern state.

On Thursday, the Hindustan Times published a photo of dozens of men clambering up the wall of a four-storey test centre in Bihar state, perched on window ledges as they folded answer sheets into paper planes flown into classrooms.

"Should we shoot them?" asked Prashant Kumar Shahi, Bihar's education minister, addressing a news conference after television news channels aired the incriminating photo and raked up the scandal. "On average, four or five persons are helping each student use unfair means," Shahi said, adding it was impossible to curb cheating if parents encouraged their children.

Exams held by the Bihar School Examination Board (BSEB) are viewed as make-or-break tests that could transform the lives of millions growing up in poverty.

Copying is rampant during state-run standardized tests and invigilators look the other way when pupils consult peers via WhatsApp messages on phones or jot down answers from notes smuggled into classrooms.

More than 1.4 million students are taking the tests this week, crammed into 1,217 examination centres in Bihar.

Supervisors stationed at notorious test centres vie for the postings, enticed by the prospect of bribes from parents eager to have their wards scrape through.

Cheating has been on the rise since the state government offered cash rewards of 10,000 rupees ($160) to lower-caste students who were able to answer about half the questions on their tests.

This year, more than 1,000 students were caught cheating in three days and have been expelled. The tests end on March 24.

Attempts to chase away family members lurking outside test centres on Thursday backfired, with stone-pelting mobs forcing police to beat a retreat.

BSEB Secretary Srinivas Chandra Tiwari told Reuters of plans to hold awareness workshops for students and parents, where attendees would be counselled against unfair means.

But many parents blame the government and indifferent teachers for Bihar's failure to curb cheating.

The state government has been accused of hiring more than 400,000 teachers on contract without checking their proficiency. In the last two years, more than 12,500 teachers failed competency tests, unable to solve questions designed for fifth-graders. "Why blame only the students? Are schools imparting proper teaching? They lack quality teachers," said Sanjeev Kumar Singh, whose son is taking the tests this year.