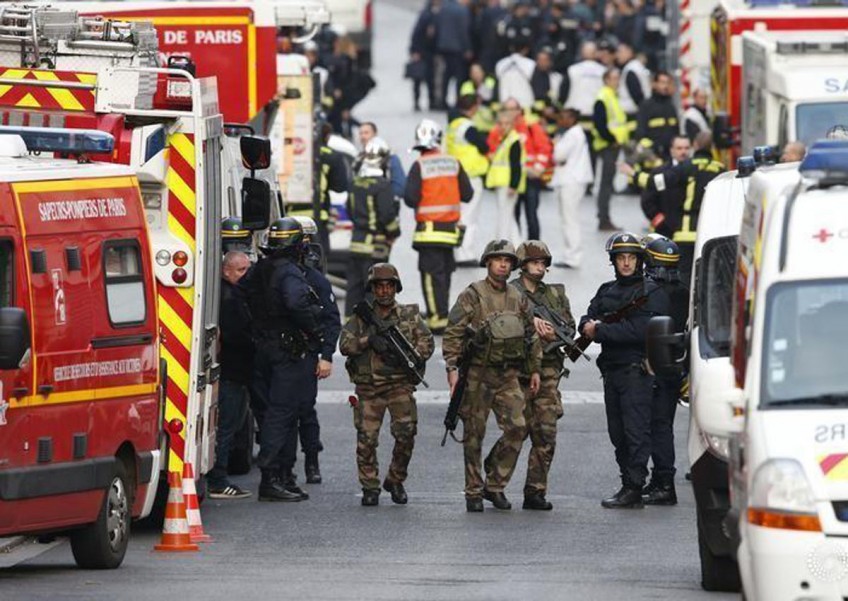 It does not take much to send panic jolting through a Paris crowd these days. Long ignored as the backdrop of sound in a big city, the wail of a police siren or the noise of a car backfiring now sets heads turning."It's quite psychotic now. People are really jumpy. All it takes is for a door van to be slammed shut for the fear to spread like a virus," said Mr Yann Osouf, the 36-year-old manager of a restaurant close to the Bataclan concert hall targeted in last Friday's massacre.

He described frantic scenes on cafe terraces on Sunday in the Marais district after people mistakenly thought they heard shots. "Tables were overturned, glasses came crashing down onto the pavement, people ran off without their cellphones. It was insane." Almost a week after the attacks in which gunmen and suicide bombers attacked bars, restaurants, a rock concert and a football stadium, France remains in a state of emergency and a deep sense of unease has spread across Europe.

Many countries have raised their threat alert to nearly the highest level and European security services have been working round the clock to answer everything - from panicked calls from the public to bomb scares. So far, none of them have been founded.

On Tuesday evening, thousands of football fans waiting to watch a friendly between Germany and Holland were evacuated from Hanover after police said they had received a "serious" warning about a bomb inside the stadium. No explosives were found.

Belgium also called off a planned match against Spain and at the England-France match, which did go ahead in London on the same evening, counter-terrorism police officers in full military kit were seen patrolling inside Wembley Stadium - a first for Britain.

But many more events have simply been cancelled.

Immediately after the bloodshed, all major Paris concerts were called off including shows by Irish rock giants U2, Motorhead, Marilyn Manson, Papa Roach and Foo Fighters.

Despite pleas for the show to go on as a mark of defiance in the face of extremism, security concerns have also shuttered other events - among them the upcoming festival of lights in the south-eastern French city of Lyon, a four-day event that annually draws around three million people.

Instead, the city will hold a one-day event to commemorate the Paris victims.

Tensions have also extended to the airlines barely three weeks after a Russian plane carrying 224 people was brought down by a bomb attack also claimed by ISIS.

On Tuesday, two Paris-bound Air France flights from the United States were diverted after a bomb scare.

And on Thursday, a Polish airliner bound for Egypt made an emergency landing in Bulgaria following another bomb alert. It later turned out to be a false alarm caused by a "drunken Pole talking rubbish", the prime minister said.

Danish police also evacuated a terminal at Copenhagen's Kastrup Airport after two men were overheard talking about a bomb in one of their bags. Placed under arrest, they told police they had been "joking".

Both Denmark and Sweden have raised their threat status to the second-highest level.

British police also evacuated a terminal at London's Gatwick Airport at the weekend, calling in bomb experts after a man acting "suspiciously" dumped an air rifle and a knife in a bin.

And in southern France, four young men were arrested on Thursday for terrifying passengers by playing Arabic prayers and songs over the loudspeaker of a train and uttering death threats.

The sense of alarm has been heightened by the very visible presence of armed police and troops across many European cities, especially at major landmarks as well as at shopping centres, train stations and airports.

In Rome, the front cover of Italy's Panorama weekly on Thursday showed a gun sight superimposed on a packed St Peter's Square with the headline "Target Rome" reflecting long-held fears about an attack on the Vatican or the Pope.

Following a tip-off from Washington about possible assaults on Rome and Milan, Italy confirmed it was hunting for five suspects, with Foreign Minister Paolo Gentiloni urging the media not to fan the flames of fear."We must not become prisoners of this alarm because that would be a gift to Daesh," he said, using an Arabic acronym for ISIS.

But the climate of fear spread by the Paris attacks has been capitalised on by the far-right, with politicians from the Netherlands to Hungary quick to play on growing concerns they slipped into Europe among the hundreds of thousands of people now seeking refugee from the conflict in Syria.