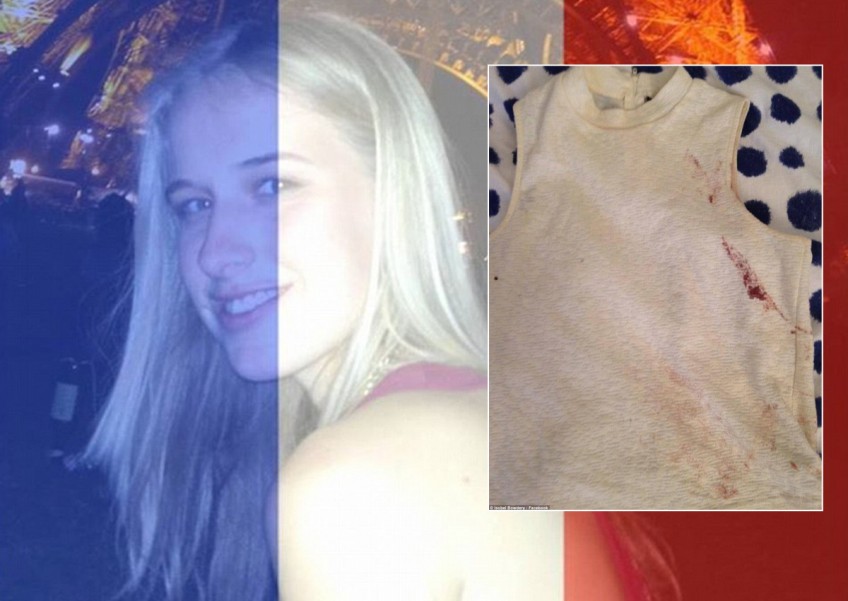 One female survivor's heart-rending account of her close brush with death at the sold-out Bataclan theatre on Friday night has triggered an outpouring of sympathy on social media.

Isobel Bowdery took to Facebook late on Saturday, posting riveting details of the ordeal she went through, along with a photo of the blood-stained blouse she wore to the concert.

Her post has since been "liked" more than 2.6 million times, including by Facebook founder Mark Zuckerberg, and has received more than 756,000 shares.

The University of Cape Town graduate, who attended the Eagles of Death Metal concert with her boyfriend, said the massacre was a scenario "you never think... will happen to you".

Describing how the atmosphere was "so happy" and "everyone was dancing and smiling" before gunmen burst in from the entrance, she claimed that the concertgoers had initially thought it was all part of the show.

Then the killing started, and Ms Bowdery was forced to lie down on the floor amid the blood of strangers as she pretended to be dead for more than an hour.

"As I lay down in the blood of strangers and waiting for (a) bullet to end my mere 22 years, I envisioned every face that I have ever loved and whispered I love you," she wrote.

She also recounted the horrifying moment when she thought that her boyfriend had been killed, and expressed her gratitude to the nameless Parisians who helped her and the other survivors during the massacre.

Ms Bowdery ended her post with this message: "Last night, the lives of many were forever changed and it is up to us to be better people. To live lives that the innocent victims of this tragedy dreamt about but sadly will now never be able to fulfil. RIP angels. You will never be forgotten."

The Bataclan theatre was the scene of the bloodiest attack in a string of coordinated terror strikes across Paris. Some 89 people were killed by four gunmen in the theatre. One of the gunmen was identified as 29-year-old Paris native Omar Ismail Mostefai.

Three of the attackers blew themselves up using explosive belts strapped to their bodies, while the last was shot dead by French commandos.