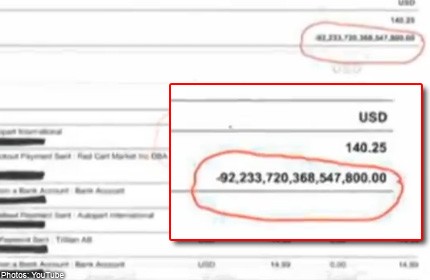 A man in the United States was accidentally credited US$92 quadrillion (S$116.5 quadrillion) in his online PayPal account, a CNN news report said Thursday.

Chris Reynolds, a PR executive who sells auto parts in online marketplace eBay, saw the US$92,233,720,368,547,800 credit in his emailed statement of account for the month of June from PayPal.

When he checked his account online, the balance was brought back to US$0, the correct amount.

PayPal had already apologised to Reynolds for the error.

The US$92 quadrillion would have made Reynolds richer than Forbes number 1 richest man on Earth Mexican telecom mogul Carlos Slim, whose wealth stands at US$73 billion, and Microsoft founder Bill Gates, who is number two on the list with US$67 billion.